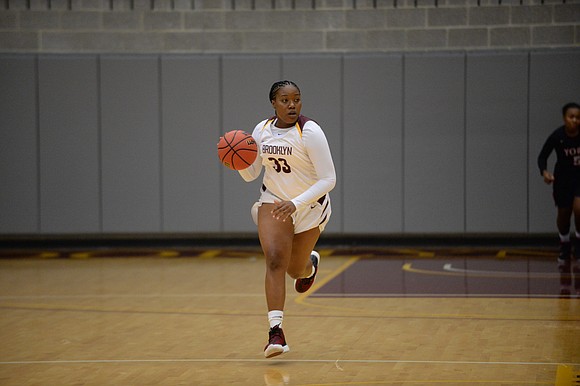 The Brooklyn College women’s basketball team is not happy with how last season ended. The Bulldogs lost a heartbreaker to Hunter College in the CUNY Athletic Conference final. Returning players together with talented newcomers are hitting the floor with a sense of purpose and are intent on establishing themselves as the dominant team in the CUNY AC.

“We’re off to a good start,” said head coach Alex Lang. “We’ve been in every game we’ve played and we’ve had chances to win all of them. It’s always nice to start the season that way. We’ve got a pretty young group and some new players playing a lot of minutes for us. It’s a little bit of a building process. We’re talented enough that we should be able to win some games while we’re teaching and learning.”

The team’s leading offensive player is junior forward Chanel Jemmott, who earned conference honors last season and was an honorable mention Division III All American. Lang described her as an undersized post player who possesses both speed and agility.

“She’s a really strong post presence who can go inside and rebound the heck out of the ball,” said Lang. “She can also put the ball on the floor and she can shoot the three. It makes her a pretty dynamic player because she can do a little bit of everything.”

Adding maturity to the mix is graduate student guard Kailyn Richburg, who is back on the court after being sidelined with ACL injuries the last two years. Lang said Richburg is very talented, but is “not quite herself yet.” He praised her attitude and said the freshmen can definitely learn from her.

“She’s getting herself back in the flow of things,” Lang said. “We anticipate her being a really good player for us at some point this year, but right now she’s getting her feet wet.”

The Bulldogs played their first CUNY AC game of the season on Dec. 3, defeating York College. They return to non-conference play for three games, including a Jan. 3 game against New York University, before diving into conference action on Jan. 6 with a game against Hunter.

“What makes a good team is not just having the focus to go out and play hard in games, but trying to get better every day in practice,” said Lang. “The team has some games to look forward to…and prepare for our league.”