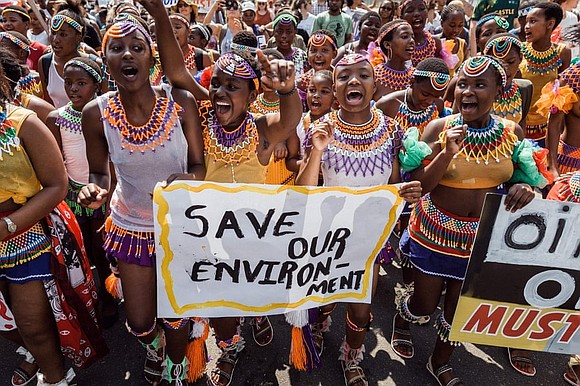 As the 25th United Nations climate conference moved into its second week, environmental activists from around the world denounced the influence of corporate power plainly visible at the Madrid summit and took to the streets in a massive climate protest led by indigenous leaders and youth.

The summit—known as COP25, or conference of parties—has so far focused on meeting the 2015 Paris Agreement to limit global temperature rise to “well below 3.6 degrees Fahrenheit.” But climate scientists say the talks are failing to produce the drastic measures necessary to address the climate crisis.

Protesters from India, Africa, the U.S., the U.K., Europe and Latin America linked arms to march through Madrid’s city center.

“We want to put an end to climate change. All over the south, there is flooding. A lot of people are dying from climate change. And now the farmers are unable to plant because there are rainfall problems in Nigeria.

“Multinationals have totally grabbed the reins of government,” he observed. “Economic concerns overrule all other interests. Industry continues to degrade the environment, overexploit crude oil resources, destroy people’s livelihoods, pollute the waterways––they can’t even be brought to acknowledge the damage they are doing, let alone clean it up.

“What is their driving force? Profit, profit and more profit. Human rights violations, climate change, none of it matters. Climate change even to the point of disaster is business.”

“Africa needs to receive means of implementation,” added Tosi Mpanu Mpanu, a lead negotiator from the Africa Group. “We need to receive financial resources, technology transfer, and capacity building. And these are not outrageous asks.”

Nakabuye Hilda Flavia of Uganda remarked: “This reminds me a bit of the rampant racism and Apartheid my ancestors endured… We are suffering severe effects of climate change, as if coming from the global south is a mortal sin, with no or very little action from developing countries.”

“Developed countries must be ashamed of themselves given the amount of carbon they emit compared to what Africa is emitting. We almost emit nothing, but we are suffering the most.”