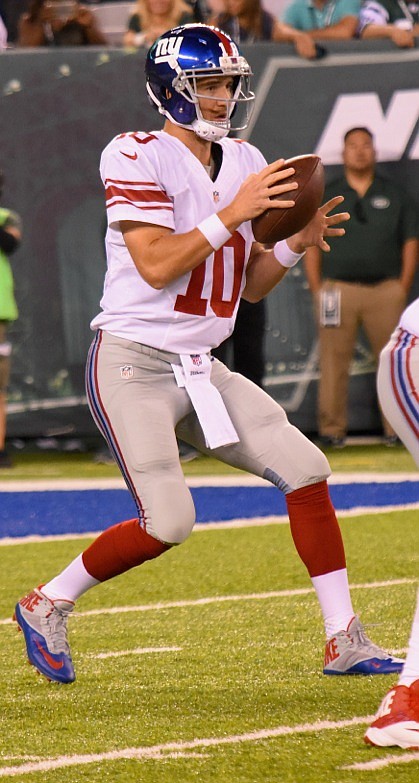 Something has to change for the Giants. Inevitably there will be numerous new faces on the sidelines—both players and coaches—as well as who is putting the team together in the franchise’s executive offices. It is the nature of the NFL, or professional and college sports leagues for that matter, when losing becomes an epidemic.

It was unsurprising, even expected, when the Giants squandered a 17-3 halftime lead over the Philadelphia Eagles this past Monday night on the road and eventually fell 23-17 in overtime to their longtime NFC East division rival.

On an evening when Giants quarterback Eli Manning returned to a position he held for 15 years before being replaced by rookie Daniel Jones in Week 3—Jones was out with a right high ankle sprain—the team couldn’t rally around him. Despite Manning’s respectable showing, throwing for 203 yards and two touchdowns with no interceptions, the Giants found a way to pull defeat from the jaws of victory.

It was their ninth straight loss this season, lowering their record to a dismal 2-11 with three more games remaining before the misery ends. It is redundant to review why the Giants came up short. Untimely penalties, a lack of creativity and adjustments on offense, and a defense that once again bent and then broke on crucial late game Eagle possessions are the recurring reasons for the distressing result.

“When you lose like this, and you lose in tough, competitive games like this, it’s hard,” expressed Giants head coach Pat Shurmur in a post game interview. “I think it’s different than when you get blown out or something really bad happens throughout the game.

“But our guys fought really, really hard and they did a good job of beating us here at the end. Those of us that are here won a lot of games before we got [to New York] and we just have to fight through it and do the very best we can to keep going. Even though the results aren’t where we want, we don’t have an opportunity to go beyond the next three games. We have to do everything in our power to make those games as meaningful as possible, and that means getting wins.”

The NFL as much as any other enterprise is outcome driven and measured by wins and losses. Under Shurmur’s tenure, the Giants have far more of the latter than the former. In a little under two full seasons on the job, Shurmur is 7-22. So is general manager Dave Gettleman, who was hired by the Giants ownership in December of 2017 to rebuild them into a perennial playoff contender.

The combination of Gettleman and Shurmur is under intense scrutiny by the Giants’ frustrated fan base and extensive evaluation by co-owners John Mara and Steve Tisch. The roster has glaring deficiencies on both sides of the ball, which falls under Gettleman’s purview, and in too many games the players haven’t been put in the most advantageous situations to win, which is on Shurmur.

The Giants chief decision makers will desperately try to alter the failing path they are on. Who will go down that trail with them will be determined in the coming weeks.