Jordan and Allen are the Nets’ centers of attention 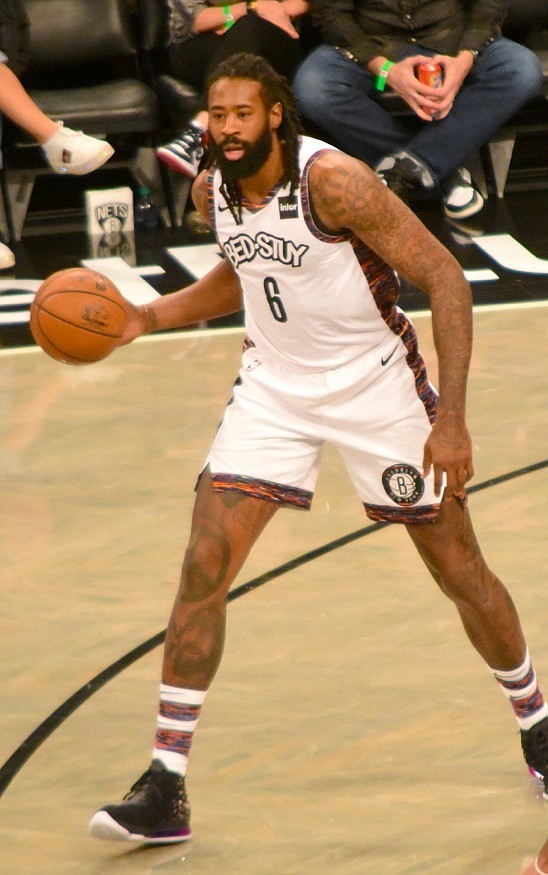 In the Brooklyn Nets’ locker room it would be DeAndre Jordan, their 6-foot-11, 265 pound center signed in the off-season along with Kyrie Irving and Kevin Durant. This is his fourth team after being drafted by the L.A. Clippers in 2008 after one year at Texas A&M, the 35th pick in the second round.

Jordan, 31, known for his rebounding, has the loudest voice, and a strong personality. His mood alone can affect the room.

Jovial would describe it after Sunday’s 105-103 home win over the Denver Nuggets, a Western Conference 5-seed.

Quick to shower and dress, wearing a designer slim-fit black knee length coat over dark plaid pants with a contrasting white sweater with stripes and designer canvas sneakers, Jordan joins Garrett Temple as he’s being interviewed by a group of media members. The repartee between Jordan and Temple brought laughter to the room.

On the other side of the locker room, the quieter side was third year Net center Jarrett Allen, still in sweats, also being interviewed.

Ten years younger than Jordan, his large afro makes him look taller, they’re both from Texas and both attended college in their hometown. Allen spent a year at the University of Texas before being drafted by the Nets in 2017, the 22nd overall pick of the first round.

This season, Allen is averaging 26.5 minutes, 12.3 points and 10.6 rebounds. His rebounding and dunking have improved as he now appears to apply greater and or equal amounts of strength with both hands.

Allen has contributed greatly to Brooklyn’s three game win streak to start the month of December; 20 points, 13 rebounds against the Atlanta Hawks, 14 and 10 against the Hornets, and 19 points, 11 rebounds versus the Nuggets on Sunday. Three back-to-back triple doubles. He’s becoming more comfortable, adapting to the game.

“I give a lot of credit to Spencer” [Dinwiddie, the Nets point guard who’s also been contributing].

“We have a little connection with each other where we know where the other is going to be. And it’s just being aggressive on the boards.”

Allen understands the importance of maintaining their momentum right now. “For us, it’s don’t get too high and don’t get too low,” said Allen. “I think we do a great job of that all around. It’s about staying level-headed and ready for the next game.

Both Jordan, Allen and the Net’s whole organization realize just how much better this team has become and will be once everyone is healthy and back on the court.

“We’re playing together, and once they come back, we’re still going to play good. We’re going to be able to integrate them into our system and keep going forward.”