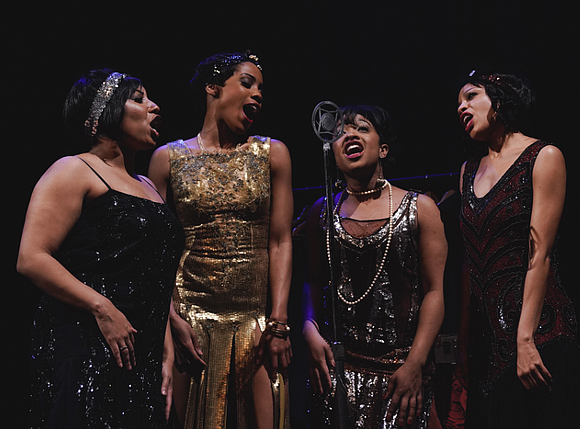 Scene from "The Dark Star from Harlem: The Spectacular Rise of Josephine Baker" Carlos Cardona photo

I had the great fortune this past weekend to catch a delightful, well-written, -sung, -danced and -staged production called “The Dark Star from Harlem: The Spectacular Rise of Josephine Baker.” This musical played at La MaMa Experimental Theatre Club at the Ellen Stewart Theatre, located at 66 East 4th Street. This brilliant production was not only extremely entertaining, it was enlightening.

Featuring a book by Glynn Borders and music and lyrics by Mario E. Sprouse, this musical told a very detailed story about how Josephine Baker got started performing, and her amazing rise in the industry. A great deal of time is spent telling how Baker was appreciated and cherished by the French. She was an artist who did what was deemed shocking, but for her was natural. She may have danced with just a string of bananas on, but it wasn’t dirty—it was art. You could see that for her, her body and her moves demonstrated that the human body is art, and to display it is an artistic means of expression.

It is so engaging to watch Iris Beaumier play Josephine Baker and show her multiple sides. She was a loving daughter, who cared for her mother financially and sought her love. There was the young lady who was a success at a young age and enjoyed living a wild life. She was an intense individual, who knew herself and what she wanted. She knew how to use her sexuality to become an enormous success.

The book wasn’t just about Baker, it was about the times she lived in—lauded in France, but Germany hated her, and Hitler told her to get out. At the same time she faced blatant racism in the United States.

In the musical, the playwright talks about Baker being part of a traveling group, with other members Gem, Ruby, Opal, Pearl and Jewel. Baker was always the one that stood out, and among the other members of the group there was some jealousy, but also support. When Baker decided to branch out on her own she was embraced by the French people. Baker performed exotic dances and also the rage of the times—the Charleston. This musical brings back to the stage old, beloved tunes like “Oh You Beautiful Doll,” and “I’ve Got You Under My Skin.”

Beaumier truly embodied the spirit of Josephine Baker; when she was nude during the musical, it was riveting to watch the energy she moved with as she beautifully recreated the intoxicating dances that Baker was known for. Everyone in this company played their parts very well and helped this musical to flow, entertain and enlighten. The cast included James A. Pierce III, Melissa Victor, Zuri Washington, Katelyn Bowman, Kimberlee D. Murray, Chris Bolan, Joe Komara, Jed Peterson, Heather Hurst and Catherine Calloway. The cast is accompanied magnificently on the piano by Mario E. Sprouse.

The musical featured sets by Joshua Warner; costume design by Raymond Pizarro; sound design by Josh Samuels; and lighting and projection design by Matthew Deinhart. There was also amazing direction by Tai Thompson.

La MaMa has a lot of interesting productions coming up, including “The Trojan Women Project Festival” from Dec. 5-15. For more information visit lamama.org or call 212-352-3101.