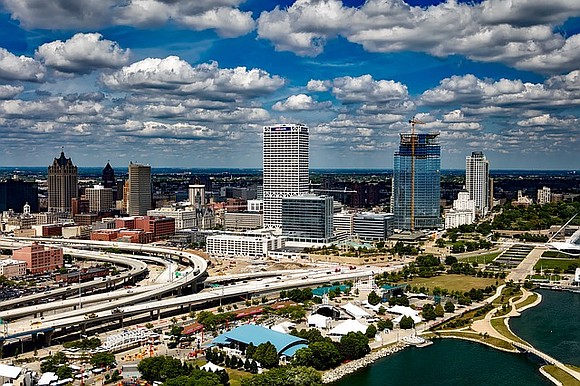 When you think Milwaukee, maybe what comes to mind is the ’70s hit television show, “Laverne & Shirley,” with its catchy opening theme song and the two of them skipping through the streets of Milwaukee. Or you think beer. This city has been all about the brew since the mid-19th century, long before it was trendy.

But there’s plenty more to this Midwestern city that’s experiencing a renaissance. The energy is different. It’s not just the excitement over the Bucks and Brewers, teams that have become worthy of much adulation. Downtown is now vibrant, and growth is spilling over to other parts of town. The new Fiserv Forum, a sports and entertainment center, breathed life into downtown, which has seen a boon in restaurants, hotels, residential and office buildings. The city will show off its stuff like a belle at the ball when the Democratic National Convention is held there in 2020.

Where to begin? The Milwaukee Art Museum and the Quadracci Pavillion, the iconic sculptural addition designed by Santiago Calatrava (who designed among other things, the Oculus, a transportation hub in Manhattan at the site of the September 11, 2001 attacks), is a good place to start. The photography exhibition, Portrait of Milwaukee, running until March 1, 2020, will give you a glimpse into life in Milwaukee through photos primarily from the 1920s through the 1980s that capture everything from civil rights marches, to the people, businesses and neighborhoods that define the city. The history provides context that will enhance your visit. The museum has a collection of more than 30,000 works of art.

When it comes to quintessential Milwaukee icons, Harley-Davidson is on the list. Make your way to the Harley-Davidson Museum that celebrates all things HD. For more than 100 years the company has been making the motorcycles that are in a league of their own. The museum is on the Menomonee River bank, and in true Harley style, it’s huge: three complexes on 20 acres. You’ll marvel at hundreds of motorcycles and company artifacts on display. You’ll have an IG-worthy opportunity to sit on a Harley and dream baby dream. If you’re visiting between May and September, take a ride on one through nearby communities. There are numerous events at the museum. On Saturday evenings from 5-9 p.m., the place to be is Harley’s MOTOR Bar & Restaurant for BBQ & Blues. Feast on hickory-smoked BBQ chicken, pulled pork, smoked brisket, grilled sausage links, AYCE French fries, jicama coleslaw, BBQ baked beans, cornbread, and hear top blues artists for no cover charge.

No doubt, downtown is where the action is. One highlight in the summer is the monthly Night Market, a free outdoor event showcasing a variety of local vendors, performers and artists. But don’t miss out on the many, varied neighborhoods. Take for example the East Side. You’ll find Black Cat Alley, an outdoor art gallery that includes works from artists from around the world. There are 17 murals by 18 artists. The East Side is also home to the Crossroads Collective food hall. Satisfy your hunger at Heaven’s Table BBQ, Frida, with its soups and sandwiches, the Raw Bar, the Falafel Guys and more. If it’s Tuesday, play Trivia at Vitucci’s and on Thursday, Texas Hold ‘Em Poker at Vintage.

When nobody was watching, Milwaukee became a foodie destination. Top chefs are drawn to the city for its affordable lifestyle and ability to do their own thing. Restaurants sprout like weeds. You won’t have time on your vacation to make the rounds to all the great eateries. But some tables you want a seat at. You get a two-fer at Good City Brewing, awesome beer and food like the spinach bacon artichoke stone fired pizza with aged white cheddar sauce, brat burger or Barramundi Po Bo (Australian sea bass). Punch Bowl Social and Glass + Griddle are other hot spots. You know you’re going to get a barrage of beer gardens, craft breweries and all things beer, but that’s not to say this town isn’t also big on wine and craft cocktails. You’ll be pleasantly surprised.

One thing you might also know about Milwaukee is its history of racism, segregation and oppression. The current revitalization also includes a deep look at these issues. There’s not only much discussion, but action. If you want to see an example of change, visit Sherman- Phoenix. The building, formerly a bank, was reimagined and rebuilt by community leaders. Today it is home to 29 Black-owned businesses, such as 2 Kings Barber Shop, Honeybee Sage Wellness & Apothecary, and restaurants like Funky Fresh Spring Rolls, Shindig! Coffee and Next Level Vegan, among others. There are spaces where artisans can hone their craft, yoga studios and more. You’ll get goosebumps seeing these entrepreneurs, some who may never have gotten the opportunity to get a business off the ground through traditional methods, thriving. Entrepreneurs receive mentoring and coaching. Sherman-Phoenix is a point of pride for the city.

If you’re a water lover, Milwaukee is located at the confluence of three rivers and on the shore of Lake Michigan. Kayak, canoe, paddle board, take a river cruise. If you want to make like it’s the 19th century, sail on the S/V Denis Sullivan, a recreation of a 19th century Great Lakes schooner.

Get your fitness fix on the 130 miles of paved, multi-use trails that flow through Milwaukee County. In summer, there’s outdoor yoga at spots around town, and Milwaukee boasts 1,400 acres of beaches and parkland close to water. Check out Havenwoods State Forest and Washington, Lincoln and Reservoir parks.

Take your pick of outstanding accommodations. There’s much buzz about the new Saint Kate Hotel. It bills itself as “The Arts Hotel” and doesn’t disappoint. It was created by and for artists. Saint Catherine, afterall, was the patron saint of artists. There are multiple gallery and exhibition spaces. Don’t want to spoil it, but there are numerous artistic surprises. Guest rooms have ukuleles and abundant art, including a mural in the closet. If inspiration strikes, there’s a paper scroll and colored pencils and if you just want to chill, there’s a record player and small selection of records. This boutique hotel exemplifies the hipster vibe that now permeates Milwaukee.