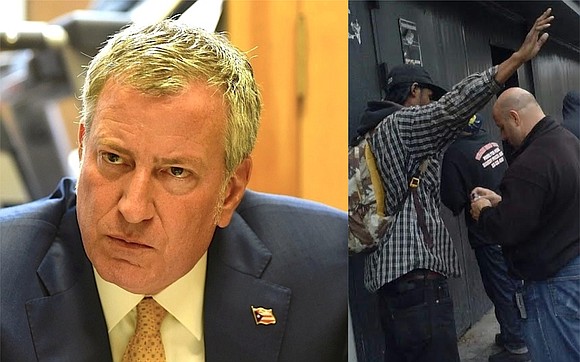 During New York City Mayor Bill de Blasio’s first term the New York Police Department launched an initiative to take on gangs in the city. Then Police Commissioner Ray Kelly announced “Operation Crew Cut” doubling the number of officers (150 to 300) dedicated to targeting teens “loosely affiliated” who define themselves by the blocks they live on and “are responsible for much of the violence in public housing.”

The NYPD also recreated the “Criminal Group Database” to track alleged gang members in an attempt to wipe out gang violence. The database includes almost 17,500 people allegedly affiliated with gangs.

A new report unveiled today details how much harm both of these operations have reaped on New York’s Black and Brown teenagers.

“Gang Takedowns In The De Blasio Era: The Dangers of Precision Policing” details how, through large scale conspiracy cases, how thousands of juveniles and adults were arrested and placed in a secretive gang database and were subjected to threats, surveillance and harassment. The report is part of the announcement of the Erase The Database NY Campaign that includes The Legal Aid Society, JustLeadershipUSA, the Bronx Defenders, LatinoJustice PRLDEF, VOCAL-NY and various community organizations.

Produced by Josmar Trujillo and The Policing and Social Justice Project at Brooklyn College Professor Alex Vitale, the report reveals how the new focus on loose associations of young people to gang members came right when the NYPD’s “stop-and-frisk” practices came under scrutiny. The report shows how the force used this as a roundabout way to keep taps on young people of color using the term “gang” to keep the public from knowing what’s really going on.

“Ironically, we’re releasing this report as a way of cataloguing all of the issues and problems with the way that the NYPD catalogues New Yorkers of color,” said Trujillo to the AmNews. “However, this report is merely a first step of identifying some of the concerns that public residents and public defenders have raised.

The NYPD’s “Criminal Group Database,” doesn’t require a criminal conviction for a person to be included in it. On top of its criteria, the department expanded its “self-admission” criteria to include social media posts, which expands the possibility of criminalizing Black and Brown kids.

Trujillo wants an independent body to investigate the police’s practices.

“We also need a thorough and independent report from the NYPD Inspector General’s office, like what has already been done in other cities, to give us more information about the gang database and the gang units that police communities of color like militarized battlefields,” said Trujillo. “We believe that the more the public knows about the NYPD’s gang tactics, the more they will be outraged.”

A spokesperson for the NYPD told the AmNews that the gang database is justified.

"There are two ways a person can be included in the Criminal Group Database. The first requires that one of the following occur: a self-admission of gang membership to a member of the Department; being identified as a gang member by two independent and reliable sources; or social media posts admitting to membership in a gang," said Sergeant Jessica McRorie, DCPI Spokesperson. The second way requires two of the following to be true: frequent presence at a known gang location; possession of gang-related documents; association with known gang members; social media posts with known gang members while possessing known gang paraphernalia; scars and tattoos associated with a particular gang, frequent wearing of the colors and frequent use of hand signs that are associated with particular gangs.

The NYPD proclaimed that it's not enough for a person to be in a gang location or wear gang colors to be included in the database. Officials said the department uses oversight mechanisms backed up by evidence to ensure a person belongs on that list.

"Currently, only a precinct field intelligence officer, a gang detective, or an investigator in the Social Media Analysis and Research Team may recommend that a person be entered into the database," continued McRorie. "This is a formal recommendation requiring a written narrative and supporting documentation that justify such individual’s inclusion. This recommendation is reviewed by a supervisor in the Gang Squad who will either approve or reject the recommendation, or request additional analysis by the Gang Analysis Section before making a decision."

The Department has created three avenues to exit the database, reviewing each person every three years, and on their 23rd and 28th birthdays to determine if their actions and records still warrant their inclusion in the database. These safeguards are robust. In the last four years, we have removed over 3,700 entries from the database using these exit ramps. Once a person is removed from the database, the fact that they once were affiliated with a gang is permanently hidden from the database.

In 2014, the NYPD collaborated with the Manhattan District Attorney’s Office to engage in a large gang raid in the Manhattanville and Grant Houses, as well as surrounding buildings, in West Harlem. The operation occurred before dawn local media outlets were alerted to the raid before hand which lead the media to assume everyone in handcuffs were gang members. In the raid, 103 Black and Latinx young people were apprehended. It lead to two indictments. Some of the parents of those arrested held a protest outside of the Harlem State Office Building. One mother told Trujillo and Vitale how police crashed into her house and arrested her son.

“As you may know, thousands of people have been catalogued as gang members within this secretive database – almost all of them are people of color,” the letter states. “I am requesting that your office provide a thorough investigation of the police department’s tactics.”

Under then police chief, and current policer commissioner Dermot Shea’s watch, the NYPD expanded its gang database program to include thousands of Black and Latinx people while simultaneously collecting their DNA (even for those not charged with a crime).

“How is the NYPD using social media to collect intelligence?” read the letter. “Are police officers misrepresenting themselves through fake social media accounts? What investigative safeguards are in place to distinguish between actual criminal involvement and youthful boasting and symbolic posturing?”

Trujillo and Vitale note that this report doesn’t try to define what a gang is and is strictly displaying NYPD’s policing infrastructure via surveys of defense attorneys and public residents. But New York isn't the only place allegedly violating the people's trust with expanded gang databases.

But New York isn’t the only place allegedly violating the people’s trust with expanded gang databases.

A recent report by the Chicago Office of the Inspector General found that their police department’s database was filled with inaccuracies, was shared with immigration officials, and in the process undermined the legitimacy of the police department and its relationship with citizens. Another audit by the California State Auditor found that the state’s gang

The AmNews contacted the mayor’s office for comment, but didn’t receive one by press time.

In November, The Legal Aid Society condemned the NYPD for maintaining an “illegal database” of juvenile fingerprints, many of whom were never found guilty of a crime.

“This illegal database existed for years, infringing on young New Yorkers’ rights, in clear violation of the law,” stated Dawne Mitchell, Attorney-In-Charge of the Juvenile Rights Practice at The Legal Aid Society. “The Legal Aid Society is proud to have brought an end to this unlawful practice. We call on the New York City Council to hold an immediate oversight hearing on the NYPD’s ever expanding surveillance of New Yorkers – including its youth – and to pass the POST Act.”

Legal Aid officials also said that they secured the destruction of the juvenile fingerprint database from the New York State of Criminal Justice Services and called for the New York City Council to pass the Public Oversight of Surveillance Technology (POST) Act that would provide New York City lawmakers and residents with a meaningful opportunity to oversee decisions about the NYPD’s acquisition and use of surveillance technologies.

Trujillo and Vitale’s report recommends that NYPD abolish the gang database and specialized gang units, increase funding for credible messenger programs across the city and divert resources away from gang suppression tactics and towards community investment.