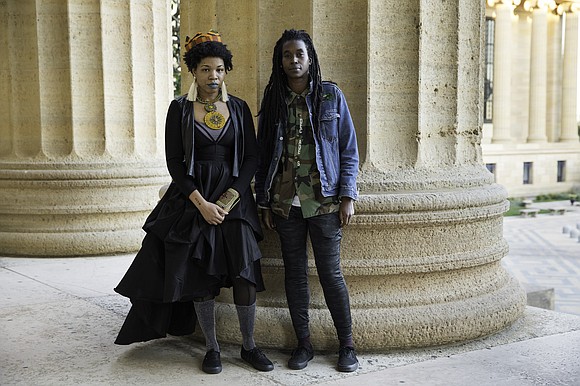 Harlem Stage’s fall season finale of the Cosmic Synthesis of Sun Ra and Afrofuturism Series will take place on Dec. 13. The final event, entitled “Sisters, Sounds and Science of Afrofuturism,” will feature performances and conversations by vocalist, songwriter and actress and original member of LaBelle, Nona Hendryx, and Black Quantum Futurism (Moor Mother and Rasheedah Phillips). Nona Hendryx will host a conversation with Black Quantum Futurism and will perform with Mi.mu Gloves and other wearable music controllers.

We had a brief conversation with Rasheeda Phillips about the beginnings, concept and futurist goals of Black Quantum Futurism.

AmNews: What is the origin of Black Quantum Futurism. How did it all begin?

Rasheedah Phillips: Black Quantum Futurism grew out of the organization I created called the Afrofuturist Affair. It was a 7 year running charity and costume ball that I did. It was a platform and grassroots cultural organization dedicated to celebrating Afrofuturism. After I connected with Camae (Moor Mother), we began collaborating on projects and [were] figuring out what things we both connected to. Our first project was Camae [creating] a soundscape to a book of time travel short stories that I wrote. Black Quantum Futurism grew out of our collaborative work.

AmNews: What is your definition of Afrofuturism?

Phillips: I don’t have a working definition. To me, the work around Black Quantum Futurism that has emerged from Afrofuturism, being its base and the foundation in which that grew, we really just use [the words] Black Quantum Futurism as a very specific thing. It’s [about] thinking about speculation, the futures and how we bring in our cultural traditions into this temporal domain of the future and what that means in terms of naturally connecting to the past, naturally connecting to the present and the now, and how our cultural traditions have always connected with and supported that.

Afrofuturism is a modern way of thinking about all of those things and synthesizing them and uses the lens of speculation or mythology to think about our place in the future. But we really rely on Black Quantum Futurism to define the theory and practices that we’re working with as a collective.

AmNews: You’re going to be performing “Sisters, Sounds and Science of Afrofuturism” at Harlem Stage this week. You’ve performed all over the world. How does it feel to be able to travel and do this work?

Phillips: It’s really amazing. I think we get a lot of love in Europe. We’re often asked to perform [there] to lecture, to do workshops, and share with their communities. So, it’s pretty special when we get to do something close to home. Of course, Harlem Stage is something that is iconic in the Black community in terms of a performance space. Nona Hendryx is [also] iconic, so it’s really an honor. It’s amazing when we get asked to share our work in America. We’re really excited.

AmNews: Do you feel that Black Quantum Futurism is bringing education of quantum physics and afro-diasporic concepts to American Black communities. Is that your goal?

Phillips: Our work is definitely focused and targeted on Black folks. That is the reference from which we work. We’re Black women and that is our frame of reference and our experience, so those are the communities we connect to and work with most often. Also, I think anybody can learn from understanding the ways in which Western and linear time has worked as an oppressive force in marginalized communities. Our audience aren’t just Black folks. There are white people understanding the constructs of how their people have used [time] to punish. [Western and liner time] is embedded in various systems that impact people’s lives, whether it is the legal system and other structures and systems, and how time and temporal oppression has reinforced racism or created a container for it.

Sisters, Sounds and Science of Afrofuturism