A special evening of dances by Donald McKayle 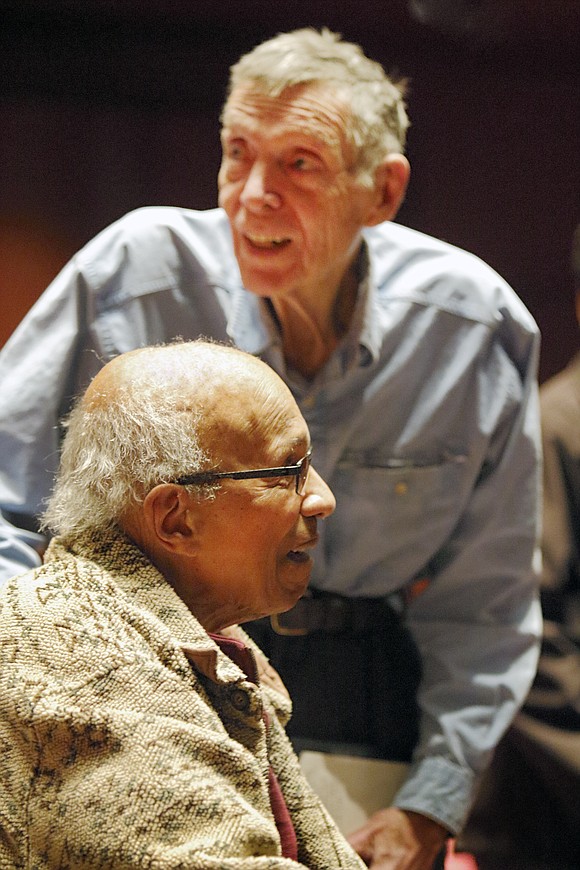 Dayton Contemporary Dance Company (DCDC), students from The Julliard School Dance Division and Ronald K. Brown/Evidence were brought together for one-night-only to celebrate dance icon Donald McKayle. This special evening was part of Paul Taylor Modern Dance Company’s month-long Lincoln Center season, and Taylor’s ongoing initiative to celebrate American modern dance masterworks. Taylor and McKayle had become close friends when they first met as new members of the Martha Graham Dance Company in 1955. Lucky for New York audiences, Taylor engaged his friend to rehearse the remounting of McKayle’s signature “Rainbow ’Round My Shoulder” for their 2016 season. McKayle died in April of 2018 and Taylor later that year in August. This year, and for this singular McKayle evening, Leslie Watanabe staged the return of “Rainbow…”

DCDC is one of few companies to house and present works by McKayle. Originally created in 1959, they premiered “Rainbow…” in 1987. And for this year’s engagement as in 2016, their presentation continues to mature. Devin Baker, Michael Green, Robert Pulido, Alvin Rangel, William Roberson, Quentin Apollovaughn Sledge and Matthew J. Talley make up the band of men determined to survive the misfortune of prison life. Each give their all in McKayle’s African American story of workers on a chain gang. And so they trudge on with labored steps and arms extended from hunkered backs, never breaking their human chain. Until finally, the only woman, Countess V. Winfrey quickly moves through them, helping to bring light and love to the burdened theme. The dancing is straight-forward and dynamic.

A cast of 17 called “The People,” plus Naya Lovell and Alexander Sargent as “The Couple,” from Juilliard, danced McKayle’s last work, “Crossing the Rubicon: Passing the Point of No Return.” First created for McKayle’s University of California–Irvine’s ensemble in 2017, “Crossing…” voices another of McKayle’s concerns about humanity, and is a meditation in slow and unpretentious movement. From the slow diagonal that introduces the dance and the many repeating phrases that follow, there is defeat, but there is also joy and a look toward the future in each step. In and out of unison, the large cast carve expansive patterns that border and highlight Lovell and Sargent’s intimate dance of balance and support.

In the first of four movements the seed is planted when The Voices of East Harlem fill the air with the driving spiritual “I’m On My Way” for McKayle’s “Songs of the Disinherited” (1972) danced by Ronald K. Brown/Evidence. In the third movement, “Angelitos Negros,” soloist Annique Roberts is a standout. A provocative split up one leg of her close-fitting dress, she begins center, one arm raised, fingers like a crown above her head, the other a hand mirror. She is intoxicating. She is purposeful and deliberate. Eyes follow closely as she turns, stops or takes time to elevate one leg and balance on the other. This urban story is replete with pleading arms and out-stretched fingers, lines that begin on bended knees and finish with backs leaning close to the floor, championing McKayle’s call to action; his call for freedom. See past the cliché bow at the end where featured dancers in the earlier works joined Evidence for a collective bow, and instead feed from the energy of the evening that is palpable in celebrating the many gifts from Donald McKayle.