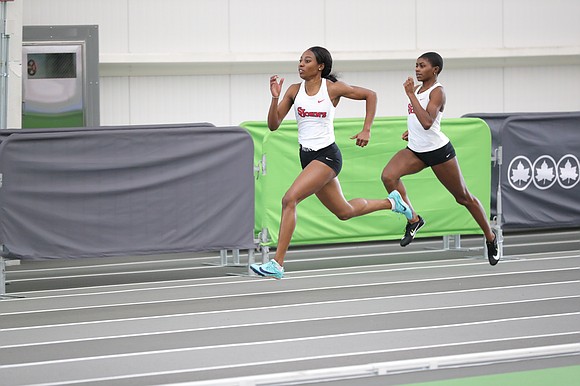 Although it was just two meets before taking a break for final exams and the Christmas holiday, St. John’s University track & field showed good form and got to channel the competitive energy that is built in training. Last Friday, the Red Storm captured first place in three events at the Fordham Season Opener. Then at Sunday’s Bill Ward Invitational in Staten Island, the team earned 23 top three finishes.

“The track kids train all fall, so they get a little anxious to see where they’re at,” said head coach Jim Hurt. “The first meets gives us the opportunity to see what they look like. We were very pleased with the opening effort.”

The Fordham meet gave the throwers a good opportunity to test their skills. Amarys Berry placed first in the shot put at both meets. Hurt said she looked great. Samantha Morillo placed third at both meets. “Throwers are a real strength for us,” said Hurt.

There are several new faces on the track team, all of whom come to St. John’s with experience. Among them are graduate student middle distance runner Chantai Smith, who ran in the 4x400 relay at Fordham and in the 500 meter race at the Ward Invitational. “She’s more mature and brings some great experience and a work ethic,” said Hurt.

Diop was injured at the Big East Outdoor Championships last spring and took the summer off to recover. “She’s working herself back into shape, and she looked great,” said Hurt. “We’re looking for some big things.”

Junior Leah Anderson missed some training due to illness during the fall semester, but she’s back in action and finished first in Sunday’s 800-meter race, a longer distance than she usually runs. “We feel she’s going to burst onto the national scene,” said Hurt. “She’s a talented girl and competes great.”

At Sunday’s meet, named for a former St. John’s coach, the university paid tribute to its 17 Olympians dating back to 1952. St. John’s track & field returns to action on Jan. 18 at the Penn 8-Team Select meet at the Ocean Breeze facility in Staten Island.