The Armory welcomes the Guiding Eyes for the Blind 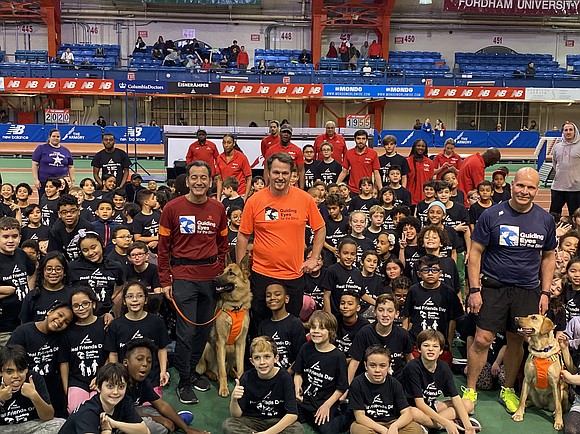 On Monday, Dec. 16, The Armory Foundation’s City Track and Little Feet community youth programs hosted Guiding Eyes for the Blind at the New Balance Track and Field Center at The Armory in Washington Heights, Manhattan.

The event, named “Real Friends Day,” comprised over 200 elementary and middle school students from the Washington Heights, Harlem and Inwood sections of Manhattan engaging with staff and dogs from Guiding Eyes.

Twice a week during the school year, the City Track and Little Feet programs meet to educate students on developing healthy exercise habits, learning the sport of track and field, the fundamentals of academic discipline, and essential values that are the bedrock of achievement.

Founded in 1954, the nonprofit organization Guiding Eyes for the Blind provides highly trained dogs to people who are blind and visually impaired. Guiding Eyes operates out of the Canine Development Center in Patterson, New York, at which puppies are nurtured by skilled handlers before embarking on their service journeys. Its headquarters and training center are in Yorktown Heights, New York, where the animals learn to be guide dogs. They also have a field training center in White Plains, New York.

According to the World Health Organization, at least 2.2 billion people globally have a vision impairment or blindness, with the leading causes being uncorrected refractive errors and cataracts. Age related macular degeneration is also a leading cause as the majority of people with vision impairment are over the age of 50.

At the aptly dubbed “Real Friends Day,” instructors from Guiding Eyes afforded each student the opportunity to get up close and personal with two 23-month old dogs: Frazier, a German Shepard, and Gwen, a Yellow Labrador. Frazier and Gwen were both fostered when they were puppies and have now been in training for four months. They will soon be assigned to visually impaired owners.

Frazier and Gwen showed the students their unique prowess as they ran around The Armory’s sterling 400-meter track, on which many national and world records have been set. Frazier and Gwen have been specially trained to run with and guide their partners, allowing blind and visually impaired running enthusiasts the ability to partake in the activity.

Additionally, three members of Guiding Eyes explained the origins of the organization to the inquisitive students, its significance to numerous people, and the importance of health and wellness. The Guiding Eyes for the Blind Running Guides program is the only program of its kind in the world, enabling people who are blind and visually impaired to run with only their guide’s support.