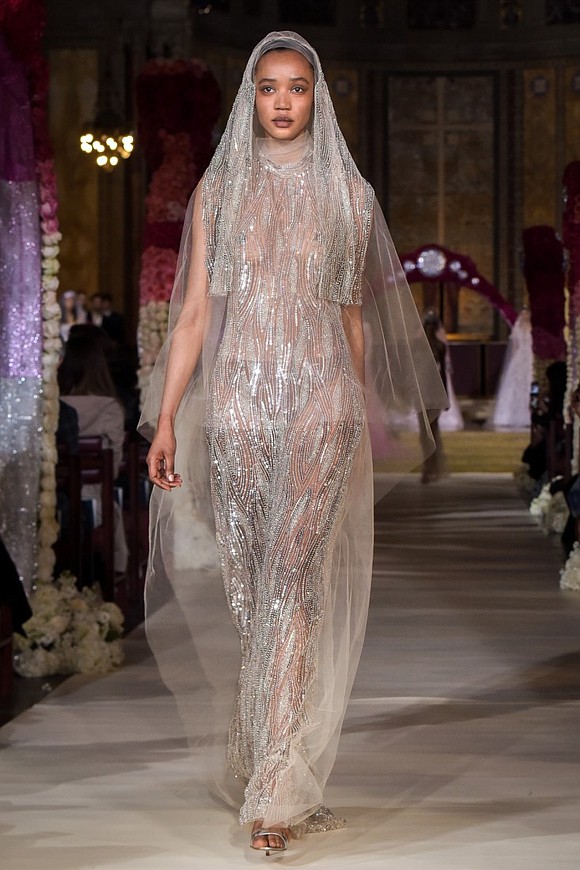 Designer Reem Acra’s Bridal collection at NYFW was sensational. The looks were glamorous, glorious, yet comfortable. For this show, Acra collaborated with Preston Bailey, an event designer and friend. Models pranced down the runway to Madonna’s tunes. There were six pretty flower girls, dressed in whispery pink enhanced with embroidery. There were several, exciting visual highlight. Acra’s bridal clothes were stunning!

The show opened with the bride in an all-white gown and a pink, crystal dusted wedding veil. She sang sweetly as the band played the music to “Lucky Star.” The collection flowed with a story-book theme. The models had fun in this show. Some danced, while others picked up their dresses and skipped. The color palette was pastel flavored, showing off shades of blush, nude. Styles were A-line, sleeveless glittery.

In 1997, she created a beautiful bridal gown for a friend to win a bet if she could complete the dress in three weeks. This first gown was exposed to media and went viral around the world. The gown was even published in The New York Times. So, she invested $20,000 in fabrics with her American Express card, pitched her designs to Saks Fifth Avenue and Kleinfeld. She was surprised to receive orders for 30 dresses. In 1999, she emerged with a new bridal line. People loved her dresses and orders poured in. She created for famous celebrities, as well as ordinary people. Her business expanded to ready-to-wear and casual clothing.