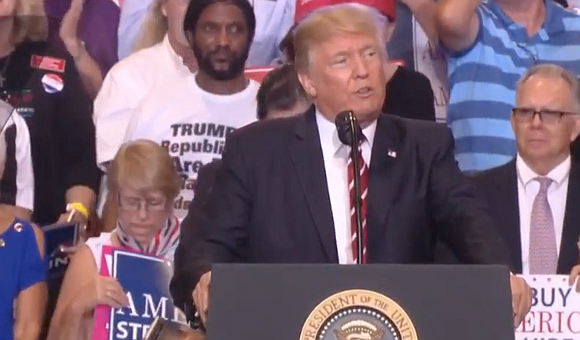 President Donald Trump’s administration wants to roll back laws and the rollback could lead to a wider wealth gap between whites and everyone else.

The president’s recently appointed banking regulator Joseph Otting of the Office of the Comptroller of the Currency proposed to move forward on changes that could weaken the landmark anti-redlining law, the Community Reinvestment Act (CRA) of 1977, and hurt low-income communities nationwide. The CRA is designed to combat redlining, or racial bias in lending, and it requires banks to meet the needs of local communities where their branches are based, including low and moderate-income communities.

Redlining, when banks deny loans to home buyers and others based on their race or ethnic background, has been illegal for decades, but continues to be the modus operandi for many.

According to Trump administration officials, the new rules proposed by the OCC and the Federal Deposit Insurance Corporation (FDIC) would: expand the types of activities that count toward CRA credit, encourage more capital, investment, lending, and services in the communities that need it most, provide clarity for banks regarding what counts for CRA credit, evaluate CRA performance more objectively and strengthen the CRA by updating rules and regulations, last updated in 1995.

Patrick McHenry, Republican leader of the House Financial Services Committee, said that the changes to the law reflect the changes in banking services and will make things better for low-income Americans due to banks’ newfound flexibility.

“In the past 40 years since the CRA was enacted, the way Americans save, access, and monitor their money has been revolutionized as a result of advancements in technology,” stated McHenry. “I’m glad to see the OCC and FDIC’s proposal to modernize the CRA to ensure it meets the current needs of the consumers it was intended to help and financial institutions alike... This proposal will encourage banks to continue to provide the services most needed in low- to moderate-income neighborhoods as well as distressed and rural communities.”

Greenlining Institute Senior Economic Equity Program Manager Rawan Elhalaby said that this law will only hurt communities of color, women and the poor: all communities that have already suffered hardships in American history.

“The CRA has been a strong, and important tool to curb redlining and assure fair access to credit for all, but it needs to be modernized and strengthened,” stated Elhalaby. “It appears that the Trump administration wants to move in the wrong direction and seeks to weaken this vital law. This would be a serious blow to communities of color, and especially women of color, who are already on the wrong side of the homeownership gap.”

Last year, an investigation by the news outlet Reveal showed how often redlining is still used as a means of lending home loans. To produce the report, Reveal analyzed 31 million records collected under the Home Mortgage Disclosure Act (HMDA) of 1975, which gives legislators the information to combat redlining tactics. The report revealed that Black Americans, Latinos, Asians and indigenous people were more likely to be discriminated against and turned down for mortgages than white people even when controlled for housing income.

In 2016, Evans Bank settled a lawsuit filed by former New York State Attorney General Eric Schneiderman after refusing to offer financing to Black families in Buffalo, N.Y. The bank allegedly intentionally excluded predominately Black neighborhoods on the city’s east side from its lending area. Evans Bank officials created a map that defined the “trade area” where people from that neighborhood would get housing loans. The trade area excluded every Black neighborhood in the city.

More than a third of Buffalo’s population is Black.

California Reinvestment Coalition Executive Director Paulina Gonzalez-Brito said that this is another direct blow to communities of color coming from the White House. “Comptroller Otting, in keeping with the entire Trump administration, has had it in for Black and Brown communities ever since assuming the role as America’s top banking regulator, or should I say deregulator, emboldening Wall Street at the expense of everybody else,” stated Gonzalez-Brito. “This latest effort to ‘modernize’ the CRA has very little to do with bolstering investments and is more about gutting a crucial law that brings resources and long-denied home ownership opportunities for low income people and people of color.”

Among the rules changes to the CRA, the Trump administration would allow banks to classify investments in sports arenas and stadiums as aid to the poor and give them tax breaks in the process. “Investment in a qualified opportunity fund, established to finance improvements to an athletic stadium in an opportunity zone that is also [a low- or moderate-income] census tract.”

Many football, basketball, soccer and hockey teams are located in “opportunity zones.”

Gonzalez-Brito said that his people will be ready to take on Trump: “As the OCC opens up this rule for public comment over the holidays, our members serving underserved communities will be sure to rally and denounce the direction of this rule and the remaking of this law.”