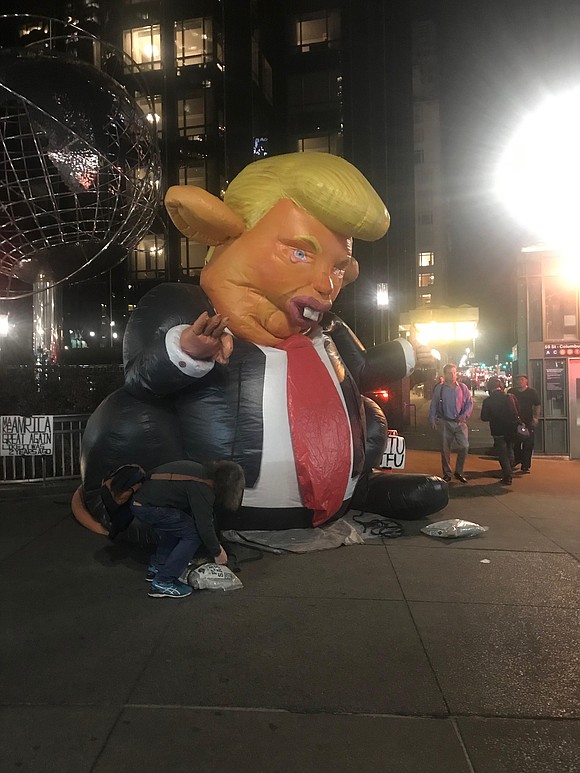 “Trump lies, democracy dies!” and “Get Trump out of the White House!” were some of the chants from demonstrators outside Trump Tower and the International Tower near Central Park hours before he delivered his second State of the Union address on Tuesday evening.

An huge inflated image of Trump, similar to the giant rat used by union members to protest unfair labor practices, amused bystanders and encouraged demonstrators in their calls for Trump the “liar-in-chief, liar and thief” to be removed from office.

When the balloon Trump was deflated, one passerby said that was how he would like to see him, “crumpled on the ground.”

But none of this would have bothered Trump, who seems impervious to attacks or criticism, particularly from his adversaries, though his latest address to the chamber had at least an ounce of bipartisan flavor.

African-Americans with a high level of tolerance who didn’t boycott the speech as Rep. John Lewis and a few others did heard his mention of Black Americans on several occasions, most explicit in his shoutouts to Alice Johnson and Matthew Charles.

“In 1997,” Trump said of Johnson, “Alice was sentenced to life in prison as a first time, nonviolent drug offender. Over the next 22 years, she became a prison minister, inspiring others to choose a better path. She had a big impact on that prison population and far beyond. Alice’s story underscores the disparities and unfairness that can exist in criminal sentencing, and the need to remedy this total injustice. She served almost that 22 years, and had expected to be in prison for the remainder of her life. In June, I commuted Alice’s sentence. When I saw Alice’s beautiful family greet her at the prison gates, hugging and kissing and crying and laughing, I knew I did something right. Alice is with us tonight, and she is a terrific woman. Terrific.”

He was equally effusive about Charles, stating, “In 1996, at the age of 30, Matthew was sentenced to 35 years for selling drugs and related offenses. Over the next two decades, he completed more than 30 Bible studies, became a law clerk and mentored many of his fellow inmates. Now, Matthew was the very first person to be released from prison under the First Step Act.”

But for all Charles’ good fortune, the First Step Act is but a minor move in the overall need for prison reform in the country where more than 2 million people are incarcerated, many of them for nonviolent crimes.

Trump also blew his horn about the U.S. economy, citing that “unemployment has reached the lowest level in over a half century. African-American, Hispanic and Asian American unemployment have reached their lowest levels ever recorded.” This, like many of his comments, was either false, exaggerated or misleading, and the evidence for the unemployment numbers still awaits verification.

It was good to see the women arrayed in white symbolizing their identification with the suffragette movement, which is preparing to celebrate the centenary of the amendment allowing women to vote, and in protest of Trump’s policies. Rep. Bobby Rush of Chicago wore a white suit and it was reported that Rep. Robert Scott of Virginia was to do the same. Most male Democrats wore white emblems in their lapels to show their support.