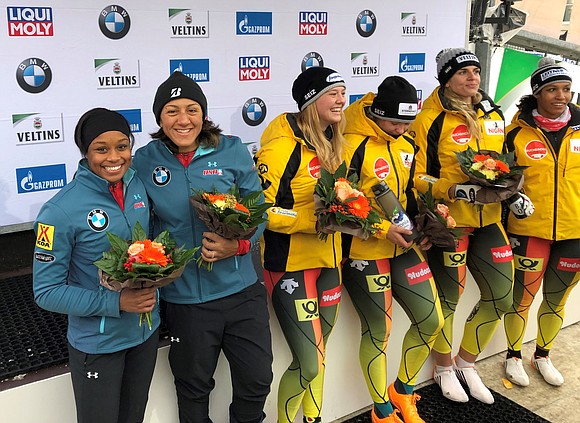 It’s a busy and exciting time for sprinter-turned-bobsledder Lake Kwaza. The 2016 University of Iowa graduate is in the midst of bobsled season. Although she finds her new sport extremely challenging and somewhat scary, she feels tremendous satisfaction as she hones her skills and moves toward her goal of being an Olympian.

Bobsled coach Mike Dionne began recruiting Kwaza when she was in college. She decided to keep running track, but she suffered an injury. While she was recovering, Dionne called again and she decided to give bobsledding a try. It’s been one year since she began training, and she loves her new sport.

Thus far in competition, Kwaza, 25, has been paired with three-time Olympic medalist Elana Meyers Taylor. Kwaza is a brakeman (rear of the two-person sled) and in practice will do runs with other drivers.

“It’s been fairly easy and stress-free [to transition to bobsled] because my parents are very supportive of what I’ve been doing and they understand that I have dreams and goals of making an Olympic team and medaling at the Olympics,” said Kwaza, who is also currently studying for her MBA.

“My strength coach at Iowa is actually still my strength coach for bobsled,” she continued. “He knew nothing about it, but he was willing to find out about it and figure out how to coach me. It’s been a really easy transition because I’ve had an amazing support system. The bobsled coaches and my teammates make it easy to train and compete. To be in that atmosphere is really fun.”

Learning a new sport is “super exciting” for Kwaza. Thus far, she is enjoying the learning process. She and Meyers Taylor have three podium finishes so far this season. She finds bobsled’s festive atmosphere quite enjoyable.

Kwaza also appreciates the diversity in bobsled. One of the ways that USA Bobsled built its program has been by recruiting track and field athletes. The first Black person to win a gold medal at the Olympic Winter Games was bobsledder Vonetta Flowers in 2002.

“It makes everything more comfortable,” said Kwaza. “You have people on your team that understand different things. You’re able to speak up.”

Kwaza next competes at a World Cup event in Lake Placid, N.Y., in mid-February. “It’s our home track, and our drivers have had many trips down the track,” said Kwaza. “I really enjoy it.”