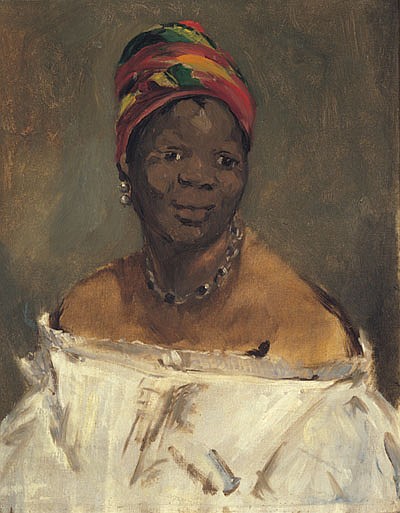 Hidden Figures.” Starring Taraji P. Henson, Octavia Spencer and Janelle Monáe, the film was very aptly titled. Based on actual people and events, “Hidden Figures” brought to light the lives of Katherine Johnson, Mary Jackson and Dorothy Vaughan—Black women who, contrary to traditional narratives about Black women, worked at the very male, very white National Aeronautics and Space Administration as mathematicians and engineers and were instrumental in some important moments in United States aeronautics history.

Though the women featured in Dr. Denise Murrell’s exhibition Posing Modernity: The Black Model From Manet and Matisse to Today were not defying stereotypes per se, they are also finally being seen in a way that Black women historically have not: as part of the fine art world in Europe and the United States during the 19th and 20th centuries. Black women were present at the start, and are indeed symbolic of modernity in fine art.

On a recent evening at the Art Students League, in its location at the landmark American Fine Arts building just south of Manhattan’s Central Park, Dr. Murrell delivered a lecture and slideshow of her exhibition. She says her main goal is to illustrate, “Changing modes of representation of the Black figure as central to the development of modern art.” The exhibition runs at the Wallach Art Gallery through Feb. 10 in New York City before moving to Paris, France’s Musée d’Orsay in March.

Though Murrell’s exhibition of more than 140 pieces of artwork included women such as dance pioneer Katherine Dunham, who was the model and inspiration for Matisse’s 1950 cutout work Creole Dancer; biracial 19th century Parisian actress Jeanne Duval who appears in Manet’s Baudelaire’s Mistress (Portrait of Jeanne Duval); and Martinican Aicha who also posed for Matisse, the catalyst for, and much of the focus of, the exhibition is a dark-skinned, working class Black woman named Laure.

Édouard Manet, seen by many as the father of Modern Art, makes a point of including a highly visible Laure in his groundbreaking 1862 odalisque titled Olympia. The painting is a mainstay of any basic Western art history course. Rather than retreating to the rear or being pushed to the extreme side, Laure’s figure stands prominently next to the main subject, the red-haired, pale-skinned model Victorine. Laure is holding a bountiful bouquet of assorted flowers that seem to almost spill from her slim arms onto the bed on which Victorine is reclining.

It is clear that the artist wants the viewer to take note of her. Still, Murrell has stated in interviews that, in art classes she has taken, instructors and students alike tended not to “see” Laure, who reportedly immigrated to France from one of its colonies. The narrative around Black women in the fine art world appeared to be so entrenched as to render viewers unable to perceive their non-stereotyped, non-exoticized presence in the works of people such as Manet, Frédéric Bazille or Henri Matisse. Manet dared the French art establishment to portray everyday lives on canvas, to acknowledge that life as they knew it had changed and that Black women were on equal footing with them as human beings, if not in social status. Black women, he seemed to say, could no longer be written off as just slaves residing in far-flung climes.

Nor was the mainstream art world drawing connections between this evolution in late 19th century art with modes of rendering the Black female figure in 20th century fine art by people such as Romare Bearden, Charles Alston and Mickalene Thomas.

It became Murrell’s mission—and her 2014 Ph.D. dissertation thesis at Columbia University—to find out about Laure. This led her to uncovering not just Laure’s role in Manet’s art discipline but the role of other Black women models in the development of Modern Art. Her search also brought great insight about late 19th century French society itself, which saw Black writers, poets, actresses and the like socially interacting with people like Manet.

Many of these Blacks had recently immigrated, changing the complexion, if you will, of Parisian society. Laure herself lived about 10 blocks form Manet’s studio. She and other Black women like her were very much a part of Parisian everyday life by the 1860s. Said Murrell, “Manet is presenting Laure to us as emblematic of a racial situation that existed in 1860s Paris just 14 years after the final French abolition and territorial surrender.”

Manet’s contemporaries who immediately followed his example include the likes of Jean Eugène-Leyen and Frédéric Bazille, who both used Black models in works such as The Childlike Kiss (1865) and Young Woman With Peonies, (1870) respectively. One model is presented as a nanny in the former and a small-time entrepreneur in the latter.

Laure is also in Manet’s Children in the Tuileries and, most significantly, in La Négresse. The art world has historically dismissed it as merely a study for Olympia but Murrell, who has been pushing to have it renamed Portrait of Laure, sees things differently. It is a typical portrait. “The artist himself,” Murrell said during her Art Students League presentation, “tells us who she was. We should refer to her as such.”