Women’s events look to be intense at Millrose Games 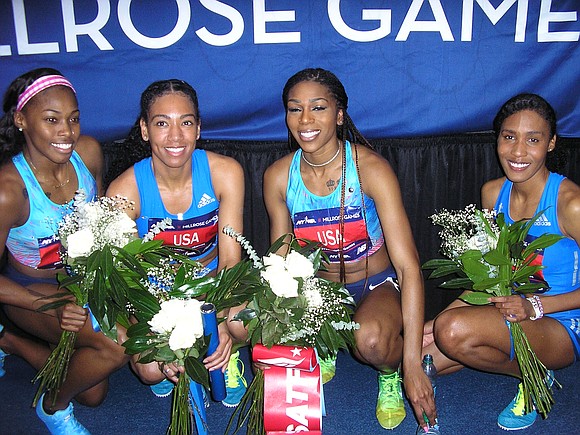 Competing at the NYRR Millrose Games at the Armory in Washington Heights this Saturday will be a heartfelt part of English Gardner’s homecoming. After training in Los Angeles for several years, the Olympic gold medalist has returned home to New Jersey and is again being coached by her father, Anthony Gardner. She trains at Princeton University, where she’s also working as a volunteer assistant coach for the men’s sprinters.

“It’s been a pretty wild ride for me these past two years,” said Gardner, who’s dealt with knee injuries, including a torn ACL to her right knee. “Coaching the men’s team at Princeton has changed me as an athlete. I love the way the guys come to practice after a long day of academics. They’re really Type A people who want to learn and be great.”

She added, “That has spilled over into my training as well. I can’t tell them to do certain things in their training and I don’t do it myself. It’s been making me hold myself accountable as an athlete. It’s benefitted me way more than I ever thought it would.”

Gardner will run in the 60-meter dash. She has run at The Armory in the past but hasn’t competed at Millrose Games since it moved there. It will be her season opener, and there will be family on hand.

Millrose Games are quite familiar for middle distance runner Ajeé Wilson from Neptune, N.J. She grew up racing at The Armory and competes at Millrose almost every indoor season. Last year, she was part of a world record-setting 4x800 relay team. This will be Wilson’s second time competing at The Armory this year. She won the 600 meters at the Dr. Sander Invitational.

“As high school kids, we always wanted to try and make the Millrose mile,” said Wilson. “It’s one of my favorite indoor meets. Last year was awesome. It was easily one of my favorite races.” She’s predicting a fast pace in the women’s 800, and she’s excited to compete.

There will be an outdoor World Championships this year—to be held Sept. 28 to Oct. 6—so track and field athletes will be pacing themselves for a busy year. Wilson is committed to running a solid indoor season.

“I’m born and raised in New Jersey, so indoors is what we do,” she said. “I love racing indoors and I always have.”