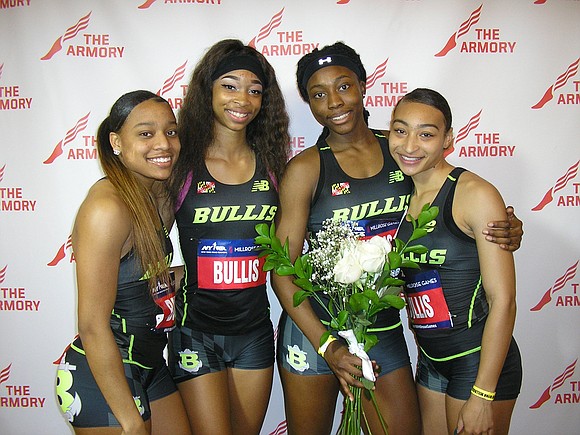 It was a fight to the finish and the women of Columbia University were determined to defend their title in the College Women’s 4x400 relay at the Millrose Games. “Our coach said to compete the same way we did last year and try to get the victory again,” said junior Iman Sule, the only holdover from last year’s relay team. “We’re all capable.”

Sophomore Terri Turner thrived on the fast pace of the race. Freshmen Jackie Patterson and Brianna Hodges grew up in New Jersey, so although this was their first time representing Columbia at Millrose, they were familiar with the Armory track. “It’s incredible. I remember being in awe of the people running at the Millrose Games. To be here now is really cool,” said Patterson.

Columbia sprints coach Marquise Stancil said it’s a pleasure to coach young women highly driven both athletically and academically. “We’re here to make sure we create a culture where they have a great experience where you can be successful in both,” said Stancil.

The girls of the Bullis School in Potomac, Md., again won the Invitational Girls 4x200 relay. Junior Shaniya Hall said the intensity of the fans was electric. “It’s a really good meet to compete against great schools,” said Hall. It was a second Millrose for junior Leah Phillips, who loved the size and scope of the meet. Although they live a distance from New York, the Armory track feels like home. “It’s a feeling of connection,” she said.

The start of the women’s 400-meter run was delayed as medical personnel attended to 3,000-meter competitor Kemoy Campbell, who collapsed. When the runners were informed what was going on, the five women in the race gathered together and said a prayer for Campbell.

The 400-meter race was won by Jaide Steptor in a time of 53.25 seconds. “It’s such a blessing to be able to do this,” said Steptor, who is coached by her mother, LaTanya Sheffield. “You want to be positive. I’m still praying that he’s okay…As far as the race, there were distractions, but that’s something we go over in practice. You may not know what the workout is before you step on the line, but you have to work with the distractions.

That’s what I practice every day.”