On the red carpet for ‘High Flying Bird’ 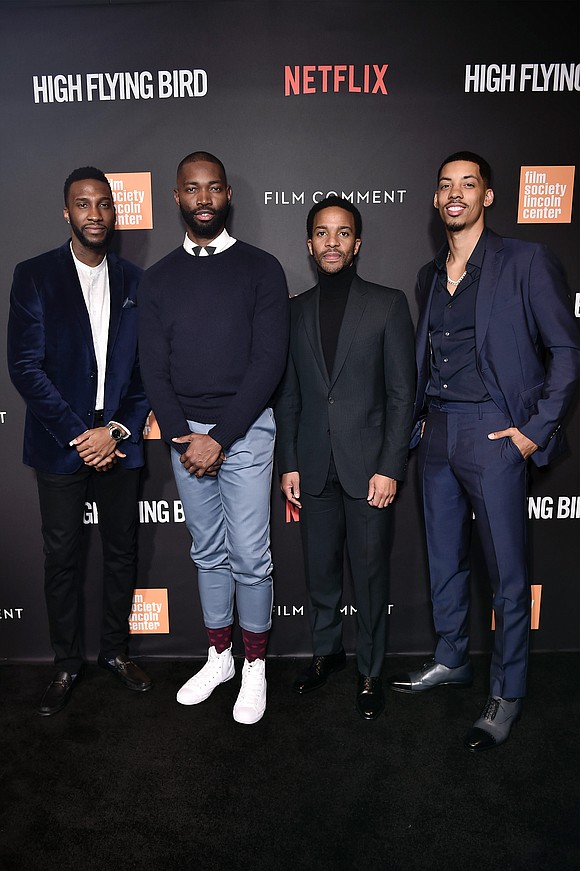 Filmmakers and cast were all on the red carpet at Lincoln Center’s Walter Reade theater this past Thursday, Feb. 7, for a Lincoln Center Film Society members’ screening of Steven Soderbergh’s new film “High Flying Bird.” The screening was followed by a Q&A discussion featuring Andre Holland, Tarell Alvin McCraney and Zazie Beetz.

Featuring a diverse cast tackling the question of how much power labor has relative to owners of the means of production, “High Flying Bird” is set in the world of pro basketball but can’t truly be called a sports film. Now available on Netflix, the sharply written tale by Tarell Alvin McCraney (“Moonlight,” (2016)), is a film about the mechanisms of power, particularly in high stakes industries such as professional sports.

McCraney said when he sat down to write it he wanted to write a film about how, “Folks try to care for one another even in places where they think they aren’t supposed to, like in the sports industry.” On a roll after winning an Oscar just a few years ago for “Moonlight” and with accolades coming in for his play, “Choir Boy,” McCraney shared with the Amsterdam News that he feels, “Happy and grateful. I have so much work to do in order for those who helped me to get here and those who need a platform to make their own voices heard and I want to make space

At the film’s center is Andre Holland who plays savvy sports agent Ray Burke. He represents Erick Scott, who has just been signed on the eve of an NBA lockout. Asked if he saw any parallels between Hollywood and pro ball, Holland remarked, “I think there are huge parallels. People on the outside looking in—myself included before I started having a career in television and film—you think they have all the choices in the world. What you’re not seeing is the ecosystem that functions around the talent. I think it’s the same even with pro athletes. Look at LeBron James, at the top of his game yet just a few years ago he had the N-word spray painted on his house. Being a celebrity or successful athlete doesn’t inoculate you from the experiences of being a Black human being.”

Melvin Gregg, who plays Erick, also sees similarities. “Athletes grow up wanting to play this game so they’re just happy to play and they’re getting paid. People are like ‘Shut up and dribble.’ A lot of times getting paid actually leaves you powerless because you have to be quiet and listen to what the person who is paying you says.”

Kyle Maclachlan’s (“Sex and The City” (2000 to 2002)) character in “High Flying Bird” is symbolic of cold, controlling, calculating corporate interests that hold sway over the players’ lives. He’s also in one of the movie’s most pivotal, viscerally shocking scenes.

Moved to do “High Flying Bird” in large part because of his admiration for McCraney he calls him, “An extraordinary writer. This was just such a beautifully written piece of material that was just relentless in style and I was excited to be a part of it.” Getting to work with Holland was also a factor. “The scene in the sauna between Andre and myself was so well written. There were so many things not said. It was beautifully nuanced. I’m a big fan of Andre’s and I said, ‘I would love to do this scene with him. I think it’s gonna be really magical,’ and it turned out to be something special.”