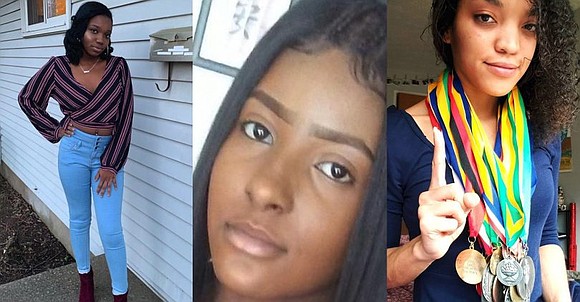 Teandah Slater, Black and also only 15 years old, was reported missing on Thursday, Feb. 7, from Noble Square in Chicago.

Areall Murchinson, a 16-year old Black girl, was last seen near the 200 block of West 111th Place, according to a community alert from Chicago police.

The three are the most recent to make the dubious and heart-breaking list of missing Black girls – particularly teens.

It’s a list that’s quite long and there remains no update on their status.

Recently, the nonprofit Black & Missing Foundation compiled statistics from the FBI which noted that in 2016 alone, 242,295 individuals of color were reported missing in the United States.

A stunning 36.7 percent of those missing were Black teens under the age of 18.

Those statistics, and the seeming lack of media interest, have led to cries of racism and neglect, particularly when it comes to Black girls.

It has also led La’Tasha D. Mayes to pen the essay, “Why the Crisis of Missing Black Girls Needs More Attention Than It’s Getting.” Mayes’ March 2017 essay was published at Ebony.com where she noted that an academic study analyzed news coverage of missing children and found that only 20 percent of reported stories focused on missing Black children. This, despite the fact that Black children account for 33 percent of total missing children cases.

“In other words, missing Black youth are grossly underreported in the news. For missing girls, it’s even worse. When Black girls go missing, far too many people don’t know or don’t care,” Mayes wrote.

Many argue that the stories of young Black girls and women who are missing don’t get the same degree of local, national and global attention as that of an Elizabeth Smart or Natalee Holloway.

Smart, a 14-year-old white girl, was kidnapped in 2002 from her home in Salt Lake City, Utah. After an intense search that included relentless media coverage, Smart was rescued by police nine months later and, among other activities, she’s become an analyst for ABC News.

Holloway disappeared in 2005 while on a high school graduation trip in Aruba.

The white Alabama teen’s story drew global media coverage and, although her remains were never found, she was declared dead in 2010.

Many maintain that African Americans aren’t afforded the intense police investigations or the media coverage given to whites that go missing.

“Black girls are magical and should be noticed, uplifted and acknowledged, both within and outside of the Black community,” said Ginger Lavender Wilkerson, a licensed marriage and family therapist in Los Angeles.

“To recognize Black girls as magical means defining them as precious, unique and valued. When society recognizes their worth and value, I believe that more attention will be paid to this matter. In addition, it will call for all people to recognize this as an epidemic and cause for action,” Wilkerson said.