AFL-CIO president to Trump: Your emergency is fake news 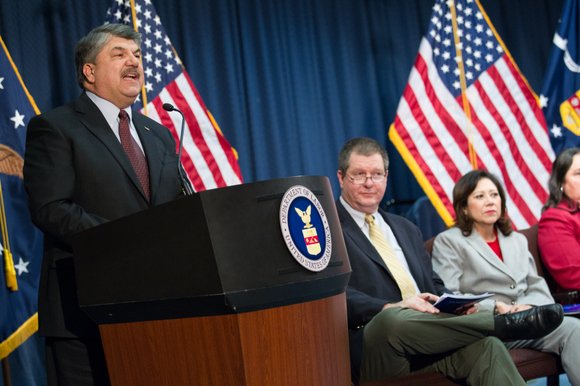 AFL-CIO President Richard Trumka took President Donald Trump to task again. This time, it’s over his declaration of a national emergency to secure funding for his border wall.

“The scapegoating and political brinkmanship of the past few months is not the way to govern,” stated Trumka. “From missed paychecks to economic uncertainty, more than 1 million hardworking federal employees and contractors have carried the burden of politicians’ mess. We may have avoided another shutdown, but political tactics of this administration persist and Congress still must provide back pay to federal contractors.”

When lawmakers gave Trump $1.375 billion in funding for a wall in the most recent spending bill, he signed off on the overall bill but scoffed at the amount of money granted for the wall. While avoiding the shutdown, Trump announced that he would declare a national emergency and take a total of $8 billion from other areas of government (the Treasury Department asset forfeiture fund, the military anti-drug account and military construction funds) to fund the wall.

“The only weakness is they go to a wall and then they go around the wall,” said Trump at his news conference declaring his emergency. “They go around the wall and in. Okay? That’s what it is. It’s very simple. And a big majority of the big drugs—the big drug loads—don’t go through ports of entry. They can’t go through ports of entry. You can’t take big loads because you have people—we have some very capable people, the Border Patrol, law enforcement, looking.”

This week, a coalition of 16 states took Trump to court over his use of emergency powers arguing that the president doesn’t have the power to divert funds because Congress controls spending. The coalition filed the lawsuit in a federal district court in San Francisco.

“President Trump has veered the country toward a constitutional crisis of his own making,” read the lawsuit. “For years, President Trump has repeatedly stated his intention to build a wall across the United States-Mexico border. Congress has repeatedly rebuffed the president’s insistence to fund a border wall, recently resulting in a record 35-day partial government shutdown over the border wall dispute.”

Reports had Trump golfing at Mar-A-Lago in Florida this past weekend, leading Trumka to note that the president’s emergency isn’t an emergency at all.

“The fact is, this is not an actual ‘emergency’ and building a border wall is not the solution to our broken immigration system to anyone who is serious about fixing it,” stated Trumka. “Furthermore, a punitive enforcement agenda attacking immigrants stands to hurt all workers and our entire country. A serious approach starts with legislation that will keep families united, protect all workers’ rights, restrict temporary worker programs and give recipients of temporary protected status and Deferred Action for Childhood Arrivals program a pathway to citizenship.”

He concluded, “Instead of declaring a national emergency out of a manufactured immigration crisis, the administration should move forward and focus on issues that matter to working families.”

The Democrat-led House of Representatives also has a plan to push back against the president’s declaration through either overriding the declaration outright or filing their own lawsuit.

For Trump, another lawsuit means it’s Tuesday. He plans to push on with his agenda.

“You don’t have to be very smart to know,” said Trump. “You put up a barrier, the people come in, and that’s it. They can’t do anything unless they walk left or right, and they find an area where there’s no barrier, and they come into the United States. Welcome.”