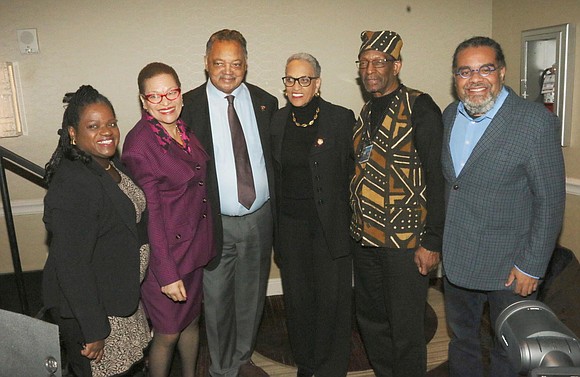 Commemorating how far African-Americans have come 400 years since the first enslaved Africans arrived in America is the focus of the Rev. Jesse Jackson’s Rainbow/PUSH Wall Street Project Economic Summit which kicked off Wednesday.

On Wednesday, Jackson hosted a discussion on the State of Black America since Blacks were brought to America and closing the wealth gap with panelists SVP/Editor-at-large of Black Enterprise Alfred A. Edmond Jr. and President and CEO of the National Urban League Marc H. Morial, and a fireside chat with Toni Townes-Whitley.

The Wall Street Economic Summit brings together the nation’s leaders, from politics to corporations to entrepreneurs, to discuss the economic parity and concerns unique to men and women of African-American, Hispanic and other minority cultures.

“We’re looking to expand upon the progress and discuss ways to increase opportunities for minorities and women,” said Jackson. “After 400 years, there is still much more work to be done in terms of our freedom, equity, diversity and inclusion, particularly in today’s political climate if we want to close the wealth gap and expand opportunity.”

The three-day summit will consist of several meetings and discussions along with a fireside chat with Jackson and Larry J. Merlo, president and CEO of CVS Health; a session on the racial wealth gap and its ties to Wall Street, including diversity on corporate boards, C-suites and consumer protection; the state of Historically Black Colleges and Universities; and the annual Ministers & Labor Luncheon where the keynote speaker will be Congressman Emanuel Cleaver II.