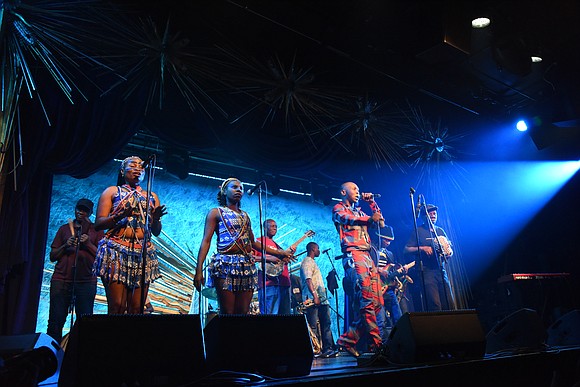 Looking like, sounding like, and inspiring like his legendary Afrobeat ‘baba,’ Fela Kuti, youngest son Seun Kuti performed like the whole world was watching, at his jam-packed gig at Sony Hall off Times Square Tuesday, Feb. 19,.

In his typically long, bang-for-you-buck show, between his own mega hits, Kuti and his Egypt 80 dropped some of his father’s flavors, and interspersed in-your-bones rhythms. He spoke to his audience about everything from Trump, to high fashion capitalist racism, and African politics and common socio-political agendas.

A world tour-er/traveler he is: from the age of nine, Seun sang with his world-famous father — even meeting this journalist in Manchester, England (circa 1993), where Fela himself, invited us to “chop some pounded am and egusi.” Yum!

When his father died in 1997, 14-year-old Seun assumed the role as leader of the Egypt 80. His father’s Afrobeat energy runs up and through his sound, his Fela-esque contortions are cannily reminiscent, and his loud politicking leaves no doubt that he has picked up the mantle, and he is on a world mission.