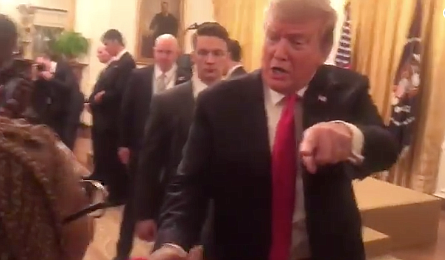 Housing and Urban Development (HUD) Regional Administrator Lynne Patton continues her promise with her month-long project of living in NYCHA housing for a month.

This week, Patton moved into her second of four residences in Douglass Houses on the Upper West Side with NYCHA advocate and tenant president Carmen Quinones. However, things didn’t go over well during the start of Patton’s stay.

Reports indicate that Patton and 10 other people were trapped in an elevator in Douglass Houses for 10 minutes. People in the elevator included members of media. Firefighters came to the rescue to get the people out. An alarm switch was accidentally hit causing the delay.

During her say this week, Patton toured the building with State Sen. Brian Benjamin. She heard stories of residents grappling with things including leaks, mold and chipped paint. One resident told Patton he hadn’t been able to use his shower in two years and he was waiting for a repair.

“NYCHA fixed the leak in the apartment above, but never came back to finish the repairs to his unit,” Patton said on social media. “A 73-year-old resident shouldn’t be forced to bathe in a sink everyday!”

Extremely productive dialogue with @POTUS tonight about @NYCHA. He absolutely loves TA President, #CarmenQuinones, and told us both to watch out for one another! Change is coming. And so is that more detailed conversation - sooner than you think! 🇺🇸 #NYCHAGoesToTheWhiteHouse pic.twitter.com/XrIN6kWSfu

Patton moved into her first residence, Patterson Houses in the Bronx, with Glady Sanchez who lives in a three-bedroom apartment, earlier this month. Patton said she wanted to learn more about the issues that NYCHA residents are dealing with.

Patton was suppose to move into NYCHA in January, however, the 35-day government shut prevented her from doing so.

Reports indicate that residents living in Patterson Houses said NYCHA quickly fixed several problems on the property prior to Patton’s arrival. One resident said that her apartment had leaks and water damage that were immediately fixed. Another resident reported that garbage in one area of Patterson that had been piling up for months was quickly removed.

HUD Secretary Ben Carson announced an agreement with the city and the NYCHA last month to provide a new roadmap forward for the housing authority that will address the longstanding issues in public housing.

As part of the agreement, the city is committing at least $2.2 billion in funding over the next 10 years to address these issues. HUD will continue to provide funding to NYCHA, which is estimated to be $1.5 billion this year.