Biney is hitting her stride 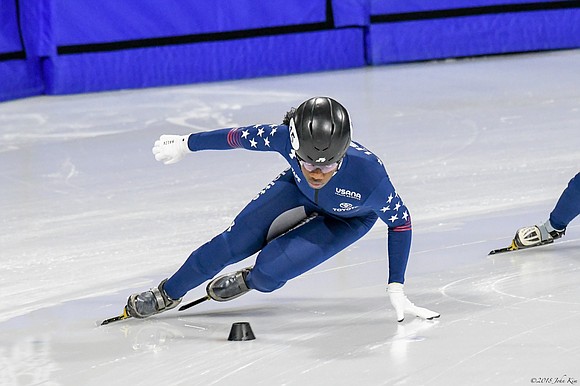 It has been a great year for short track speed skater Maame Biney. In January, she won gold in the 500 meters at the World Junior Short Track Speed Skating Championships and set a junior world record. In February, she won two bronze medals at the World Cup event in Torino, Italy. Next week, she heads to the World Short Track Speed Skating Championships in Sofia, Bulgaria.

“I enjoyed the Olympics so much,” said Biney, 19, who competed in the 2018 Olympic Winter Games, only the second African-born athlete to represent the U.S. at the Winter Olympics. “It felt like an atmosphere where you know everyone is there for a reason and worked their butts off to get there. No one is slacking off. The environment there was super great. My team was super awesome. It was a great experience and I would not trade it for the world.”

Biney was born in Ghana, West Africa, and immigrated to the U.S. with her father as a small child. She grew up in Northern Virginia, where she first tried figure skating and then switched to short track. Ghana made its Winter Olympics debut in 2018, and Biney had the opportunity to meet the country’s pioneer competitor, skeleton athlete Akwasi Frimpong, and the four athletes from Nigeria.

“They were so cool,” she said. “I think we had that connection where, ‘We’re all from Africa and we’re all here at the Winter Olympic Games.’ … I know I’m saying awesome and cool a lot, but those are the only words I could express how grateful I was to meet such amazing and inspiring people.”

After finishing out the 2017-18 season, Biney took an extended break from training. She now lives and trains in Utah. It doesn’t bother her that short track doesn’t get much attention in non-Olympic years.

“I wasn’t used to the attention that I got in those two months,” said Biney. “This year has honestly been way better than I ever thought it would be. Coming back from the break was really hard—both mentally and physically.”

She said over-thinking and nerves hampered her performance at her first two World Cup events, but she was able to turn it around. In her most recent races, she has had a different mindset.

“I thought, ‘I’ve got this. I can do this,’” Biney said. “I was able to become more successful than I was the previous years I’ve been on the international circuit. I’m super excited what’s going to happen the next three years.”