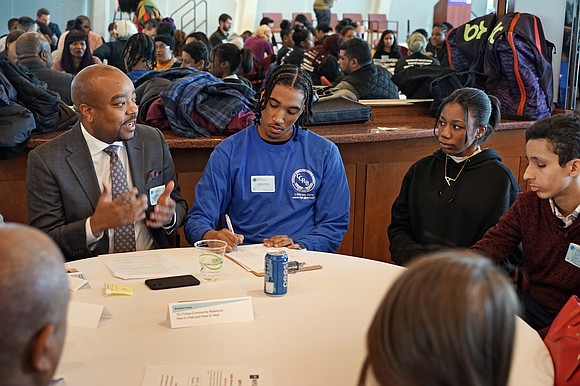 Participants in the “Police-Community Relations: How We Feel and How ToHeal” breakout session, with Dr. Michael A. Lindsey of NYU McSilver and Demetrius Doward of the Youth Advisory Council at center. Miles Z. Martin/NYU McSilver

Approximately 300 young people attended Speak Up, Speak Out: A Youth Summit on Policing in New York City, hosted by the Civilian Complaint Review Board and New York University on Feb. 26. The event brought together practitioners in police oversight and reform and criminal justice scholars for a conversation about policing.

The NYU McSilver Institute for Poverty Policy and Research and the NYU Law Center on Race, Inequality and the Law invited young people between the ages of 10 and 24 to the NYU Kimmel Center. During the conference, young New Yorkers from the city’s five boroughs shared their experiences with policing, identified problems in their communities, and recommended solutions to public safety and police oversight practitioners and academics.

According to the CCRB, more than 1,000 alleged victims of police misconduct reported in 2018 were between the ages of 10 and 24.

As part of its effort to maximize engagement from young New Yorkers during the Youth Summit, the CCRB in December organized a Youth Advisory Council. The working committee is made up of 19 young leaders who were selected by the Agency after demonstrating a dedication to criminal justice issues and improving police-community relations during the application process.