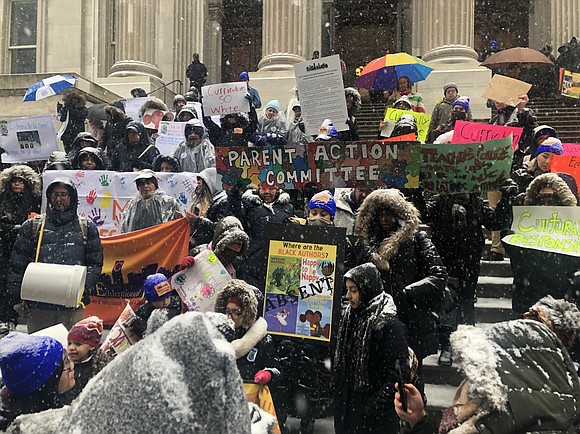 On Wednesday, Feb. 20 the Coalition for Educational Justice gathered with parents and kids in blustery conditions on the steps of the old Tweed Courthouse to delivery their disappointment about the lack of representation of students of color in NYC’s elementary curricula.

“What do we want C-R-E, when do we want it, now!” was their chant. CRE, as defined by the coalition, is a cultural view of learning and human development in which multiple forms of diversity are recognized as indispensable sources of knowledge for teaching and learning.

The coalition created a report and are calling on the Department of Education to look at it and adopt a more culturally responsive curriculum city-wide. The CEJ wants the city—even though they have committed publicly to increasing diversity and integration in public schools—to address the lack of authors and characters of color in the curriculum.

“None of you should be out in the snow or the cold but yet again the system forces parents of color on the steps of Tweed to fight for a high-quality education that respects, affirms and reflects them,” said Natasha Capers CEJ coordinator. “It’s not right that we have to do this time and time again. It’s not right that City Hall and the DOE talk the talk but has yet to walk the CRE walk.”

The CEJ’s report shows that while only 15 percent of NYC public school students are white, on average 84 percent of the authors used in elementary school are white which is more befitting for Bismarck, N.D. whose school population is 82 percent white.

The report also shows that white authors and characters also dominate the 10 optional reading lists widely used in city schools. That 118 titles feature white authors and there are only about 22 books written by authors who are not white.

Capers said that they have two requests that they want the DOE to immediately look at. They want them to start to create culturally responsive English language curriculum and implement them by this summer. The second request they have is that the DOE stop working with textbook and publishing companies who refuse to diversify their booklists.

“It is not right that our books and curriculum do not reflect the most diverse city in the country,” she said. “It’s not right that our kids can go through the system and not read about people that represent them until they chose too or are in college.”

Parents gathered said that this is unacceptable in a city where Black and Hispanic kids lag behind their white and Asian peers on state exams.

“It’s important for kids to see themselves in books because it allows them to dream big. It engages them, they pay attention,” said Kiesha Griffin, who has one child enrolled in District 9 in the Bronx. “We have had enough of teaching our kids about Europe and how they colonized the world. Stop whitewashing our history to our kids.”

Griffins said that if you teach kids about themselves and diversify the books they read, then they will be more culturally conscious of their communities. That it would be a domino effect leading teachers to understand the kids sitting in front of them, and kids will treat their peers with more respect.

Schools Chancellor Richard Carranza has expressed support for more diverse reading lists and the DOE has noted that the city has set aside $23 million for anti-bias and culturally responsive training for school staffers.

“Our students should see themselves in the books they read and the lessons they’re taught,” said Danielle Filson, spokeswoman for the DOE. “We’re prioritizing culturally responsive curriculum that includes a diverse range of voices.”