The ‘Green Book’ returns to Harlem 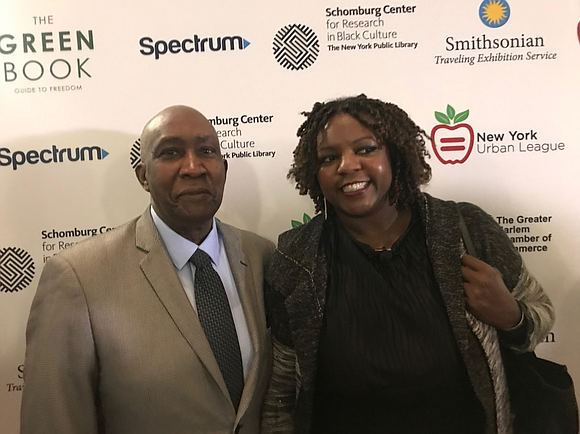 “The Negro Motorist Green Book” arrived back in Harlem the other night where it began. When the “Green Book” film hit the nation’s screens last year it commanded wide acclaim, though the film, which has received a number of significant nominations, has less to do about the book than a dramedy between a superb African-American pianist and his Italian chauffeur.

Yoruba Richen’s documentary “The Green Book: Guide to Freedom” is far more explicit in celebrating the book that helped African-American travelers, particularly those traveling by car, navigate the difficulties of racism and discrimination. This point was made again and again by Richen and several guest speakers and panelists Wednesday evening Feb. 20, at the Schomburg Center.

“He was a Harlemite,” Williams explained, “and many businesses benefited from his guide and were inspired by his entrepreneurial spirit.” Green was indeed a resident of Harlem and lived at two locations on St. Nicholas Avenue, from 139th to 157th Streets. The first “Green Book” was published in 1936, and the last, with the success of the Civil Rights Movement, was issued in 1964-’65.

Informative discussion came from panelists Candacy Taylor, a “Green Book” expert; S. Marquette Folley, content director, Smithsonian Institution Traveling Exhibition Services; and moderator Les Trent, senior correspondent, “Inside Edition.” The audience delivered a standing ovation after the 51-minute film concluded. When asked about the making of the film, in which she deftly weaves interviews, stills and some archival film footage, Richen said, “It was a team effort.” She noted further how important the automobile industry, Esso Gasoline Company and an emerging Black middle class was to the success of the “Green Book.”

While the “Green Book” does not delve into the dreaded “sundown” towns where Blacks were told not to venture after dark, Richen skillfully surveys this history, with a particular emphasis on the lynchings and hostility Black motorists faced traveling through the South, and parts of the North, during the Jim Crow era. In this way she extends the book’s primary purpose to show some very insightful and surprising ramifications.

As Poe observed in his opening remarks, the “‘Green Book’ is a celebration of the American spirit,” and Richen’s film takes the guide into vistas of challenge and relaxation, especially with her focus on such legendary vacation spots as Idlewild, Mich. In effect, the “Green Book” was a resourceful guide to avoid danger and to recommend safe places to rest and relax; it was a veritable “dream book,” and it is sadly ironic that Black citizens needed an above ground book to take many of them back along the fabled Underground Railroad.

Folley defined the book as “an American story book,” and Richen’s film has taken that description to cinematic heights, giving the book a compelling new aperture in which to witness the determination of African-American enterprise and creativity.

You may not see this in time for the screening of the documentary on Smithsonian Channel next week, but given the film’s growing popularity, it may warrant repeated showings, or better yet Richen and the “Green Book” may pop up in your town.