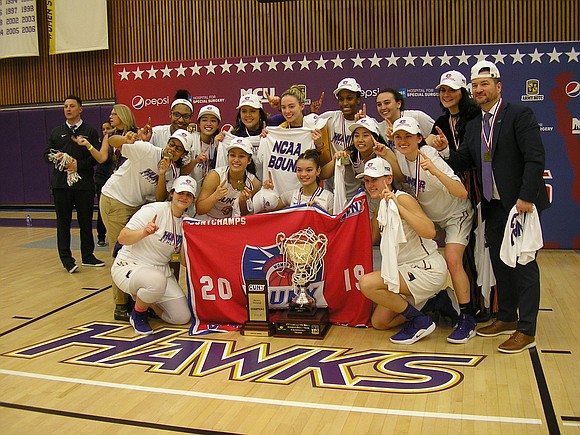 In a tense, physical game in which the lead swung back and forth, Hunter College prevailed over Brooklyn College 76–65 to win its first CUNY Athletic Conference title since 2004. For the team’s seniors, it was an especially sweet victory.

“It means everything,” said senior forward Ashley Arias, who had 15 rebounds, six points and two assists and was named to the CUNYAC All-Tournament Team. “I put it all on the court for my team. If you can’t score, you find other ways to impact the team.”

A psychology major who plans to go to graduate school, Arias said she dreamed of the victory throughout college. She values the collective team effort and commitment to win that the Hawks have had all season. “This team is very motivated, very energetic and we love to win,” she said.

Coach John Garrett, CUNYAC Coach of the Year, described the Hawks as a spectacular group that is easy to coach. He praised the leadership of the upperclassmen. When senior guard Jade Aponte, CUNYAC Player of the Year, was double- and triple-teamed, the other players stepped up.

“It’s a group effort,” said Garrett, who wears a pin that reads “Good Vibes Only.” “They’re the ones that balance me out. I tend to be the most intense of the group, and they tend to turn to me and say, ‘Calm down.’ They can be the positive, quick-thinking, helpful ones.”

In his fifth year at Hunter, it was Garrett’s first time coaching the Hawks in the CUNYAC Championship game. He is pleased to add to Hunter’s CUNYAC titles in many sports and make the college’s case for this year’s Commissioner’s Cup.

Junior guard/forward Janine Conway, who played the entire 40 minutes and scored 24 points, was named MVP. Hunter will face nationally ranked Bowdoin College in the first round of the NCAA Division III Tournament in Maine on Friday.

In the men’s championship game, Baruch College defeated College of Staten Island 76–74 on a buzzer-beating shot by junior forward Benjamin Boteng. The Bearcats’ first-round tournament opponent is the College of Wooster in Wooster, Ohio, on Friday evening.