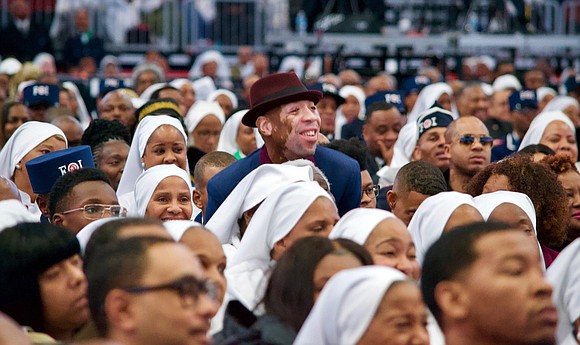 Saviour’s Day Convention 2019, the Nation of Islam’s annual celebration of the birth of “the Saviour,” Master Fard Muhammad, may have been the “best Saviours’ Day convention ever,” as one participant said.

Called in the past the “culminating Black History Month event,” the convention generally held close to the Feb. 26 birthday of NOI founder Master Fard Muhammad, this year took place Feb. 15-17 in Chicago at the McCormick Place Convention Center, with the Hon. Minister Louis Farrakhan’s annual Saviour’s Day address delivered at the United Center, home of the NBA’s Chicago Bulls.

The NOI, its members say, is “historically known for exemplifying a culture of unity, love and service.”  This was in full affect during the three day conference.

The convention began Friday with Jumu’ah prayer service, and ended with Farrakhan addressing over 20,000 seated in the United Center, with thousands viewing via livestream in venues across the country and around the world.

There were three major forums, including a tribute to the 40th anniversary of the Final Call News, a “Defending Farrakhan” panel discussion and “The Vote for Separation” town hall session, hosted by Dr. Ava Muhammad, national spokesperson for the Nation of Islam and Farrakhan.

During the  filled-to-capacity session, Dr. Muhammad revealed these traveling town hall sessions had been “birthed” out of the mind of the minister when in 1986 he framed a lecture around “Self-Improvement: The Basis of Community Development,” which later became source material for a study guide.

She said as long as Blacks are under whites, their ideas will get aborted and won’t come to life. She said this is a reason for separation.

“We are here to engage in an action of voter registration being conducted by the Nation of Islam,” she said. “We want those whose parents or grandparents were descendants of slaves to be allowed to separate. We will take eight states. That’s where we are starting.”

Audience members were encouraged to text “separate” to “31996” to receive updates on the Separation Project. Also, the crowd was told that those interested in hosting a town hall in their city and assisting with the organization and process of separating can visit the project at separation.com.

During the “Defending Farrakhan: The Showdown!” session members of the NOI Research Group took center stage. NOI attorney and NOIRG member Arif Muhammad shared the importance of knowing  the historical context of today’s cries of anti-Semitism and the origin of the term “Black Hitler” leveled at Min. Farrakhan.

He said the term “Hitler is  synonymous with the desire and effort to sterilize and exterminate Jewish people by Adolf Hitler, an action the minister neither participated in nor advocated others to participate in.” He said it occurred after the minister and NOI came, at the request of presidential candidate the Rev. Jesse Jackson, to the aid of his campaign. And once death threats materialized after Jackson expressed support for the Palestinian people and met with Yasser Arafat, this earned him the wrath of Zionist Jews, leading to death threats and the bombing of one of his offices.

Farrakhan came to Jackson’s aid providing personal security in the form of the FOI, and stating publicly that certain members of the Jewish community should leave Jackson alone.