Census 2020 push kicks off in Harlem 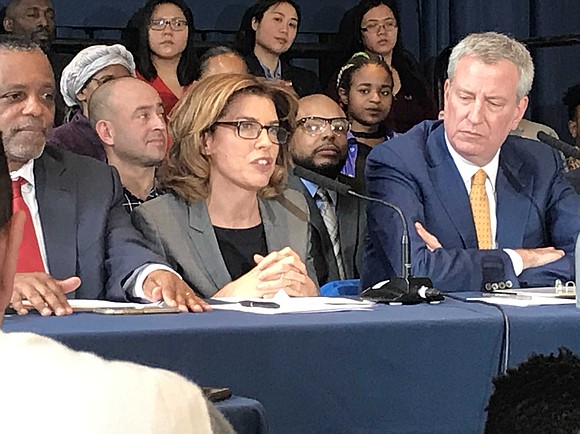 Mayor Bill de Blasio is joined by Deputy Mayor Phil Thompson and Julie Menin at the news conference annouce Census 2020 plans and the appointment of Menin as its director. Elinor Tatum photo

Elected officials and community leaders came together for a news conference at the Schomburg Center in Harlem Wednesday to announce the city’s plans for the 2020 Census.

New York State NAACP Conference President Hazel Dukes, Greater Harlem Chamber of Commerce CEO Lloyd Williams and Brooklyn Borough President Eric Adams were among those at the news conference to outline the effort to get Black New Yorkers to participate in the 2020 Census.

New York City has historically been undercounted, especially in communities of color and immigrant communities. Leaders said they plan to get the word out through the use of volunteers, outreach in ethnic media and organizations.

“This census count is not just about you and yours,” Dukes said. “It’s about those who say they love their neighbors. We will get this right.”

The U.S. Constitution requires a count of the nation’s population every 10 years to determine the number of congressional representatives for each state. The government also uses census data to distribute an estimated $600 billion in federal funds annually.

Even though it’s a year and half away, the 2020 Census is already invoking controversy. President Donald Trump’s administration previously announced the questionnaire meant to provide a snapshot of the nation will contain a question about immigration status.

The question hasn’t been asked in the Census since 1950 and opponents say it’s unconstitutional. The issue is set to go before the Supreme Court in February.

Mayor Bill de Blasio appointed Commissioner of the Mayor’s Office of Media and Entertainment Julie Menin as director of the Census for New York City. She also will serve as executive assistant corporation counsel for Strategic Advocacy. Menin will organize extensive outreach efforts to encourage New Yorkers to participate in the Census in July 2020.

“For the first time in 70 years, the Census now includes a question on citizenship,” Menin said. “A matter we in New York City are a lead plaintiff on because we know that this question is not only unlawful, but we know what it’s really about. Immigrants in this city and across the country know that by asking this question, the federal government seeks to silence them.”