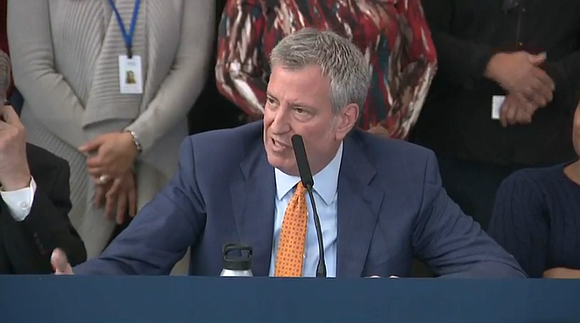 The holidays came early for members of Teamsters Local 237.

The 43-month agreement provides annual raises of 2 percent, 2.25 percent and 3 percent, with workers receiving 2 percent back pay from at 2018. Additionally, 237 members will receive annual annuity increases of nearly $500 by the end of the contract. Active and retired workers will see increases in payments to Local 237’s health and welfare funds, and the contract maintains current pension and health benefits.

“This agreement will improve the lives of 400,000 New Yorkers who call NYCHA home,” stated de Blasio. “Our administration has secured the first changes to work hours in 50 years. That means residents will have faster service and staff working mornings, nights and weekends to better maintain buildings. These improvements are coupled with wage increases that are fair to workers and fair to New York City taxpayers.”

According to the agreement, the union and the city will work to provide New York State Paid Family Leave benefits to NYCHA employees by June 2019.

The tentative agreement also includes new work schedules for caretakers and supervisors for the first time in almost half a century. Since the 1960s, the schedule has always been Monday through Friday, 8 a.m. to 4:30 p.m. With the new agreement comes five possible schedules covering early mornings, beginning at 6 a.m., and evenings until 7 p.m., which includes Saturdays and Sundays. According to the parties in involved, this change gives NYCHA the ability to better maintain buildings and deliver faster service.

“Since starting at NYCHA 10 months ago, it has been my mission to improve on the delivery of services to our residents and for NYCHA to become a better landlord.” stated NYCHA General Manager Vito Mustaciuolo. “This was a huge undertaking and through collaboration with Local 237, NYCHA’s HR team and the Office of Labor Relations, our residents will soon see much cleaner homes and better service.”

According to the city, the gross cost of the tentative agreement is $82.7 million, some of which is offset by $24.4 million in health care savings, leaving a net cost of $58.3 million. City officials state that the agreement wouldn’t require any additional funds to be added to the city’s financial plan.

Union members still have to vote on the deal, but NYCHA Interim Chair and CEO Stanley Brezenoff is optimistic.

“This is a historic agreement for NYCHA,” stated Brezenoff. “In partnership with Local 237, we will be able to better serve our residents with a seven-day workweek. We hope to see this deal ratified quickly so we can immediately start helping our residents and become the landlord they deserve.”