Missing the playoffs again, the Giants have a lot of work ahead 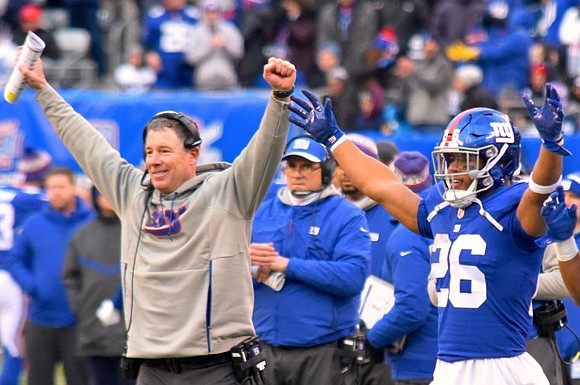 Giants head coach Pat Shumur stood in front of a podium in a cavernous room at MetLife Stadium Sunday and briefly scanned the media assembled in front of him. It would be the 11th and last time in the 2018 regular season that Shurmur would field questions after a loss by his team.

The Giants had just suffered another close defeat, this time to the Dallas Cowboys by 36-35, their eighth by a touchdown, and Shurmur’s thoughts on how the franchise can recover from another deflating season were measured and philosophical.

“I told the players, and it really is true, what we’re going through, trying to grow away from 3-13, this really is not about football,” said Shurmur. “This is about leadership. People in control. People in the locker room. This is about team building. It just so happens we play football. And when we tip those first couple of things over we’ll start to see the results that we’re looking for.”

It’s also about talent and synergy, and the Giants lacked both in critical areas in going 5-11 and missing the playoffs for the sixth time in the past seven seasons. The process of rectifying the issues that have hampered them for much of the past decade began for general manager Dave Gettleman and Shurmur Monday. They have no time to exhale. There are too many important personnel decisions to be made, most prominently will Eli Manning be the starting quarterback for one more season? The NFL Draft, which will be held in April, as well as free agency are in their view.

Although Manning’s status will garner most of the attention during the offseason, Gettleman has to begin by addressing the offensive and defensive lines, the weakest units of the team. The Giants have 10 picks to date, including No. 6 in the first round. And despite all the noise that they should have taken quarterback Sam Darnold with the No. 2 pick instead of running back Saquon Barkley in last year’s draft, the Giants got it right.

Darnold, who the Jets drafted with the third overall pick, showed promising potential in his first NFL season. But it is still uncertain what he will become. And even if he does evolve into a franchise quarterback, it does not guarantee the Jets will be a perennial playoff or Super Bowl contender. Barkley is already a star.

He set the franchise rookie record for rushing yards with 1,307, touchdowns (15) and rushing TDs (11), and became only one of three rookie running backs to amass 2,000 or more yards from scrimmage. Moreover, his 91 receptions were the most by a first-year running back in NFL history.

The Giants’ collective struggles juxtaposed with Barkley’s individual success stirred conflicting emotions in the native of the Bronx. “It doesn’t mean so much to me,” he said of his records before admitting to being gratified. “Obviously I’m not going to lie to you, it’s an amazing feeling, it’s awesome to accomplish those things. That’s stuff that you dream about as a little kid, but you can’t do that by yourself. It’s a team thing.”