The Rev. Jackson and the Rev. Sharpton—twin voices of struggle 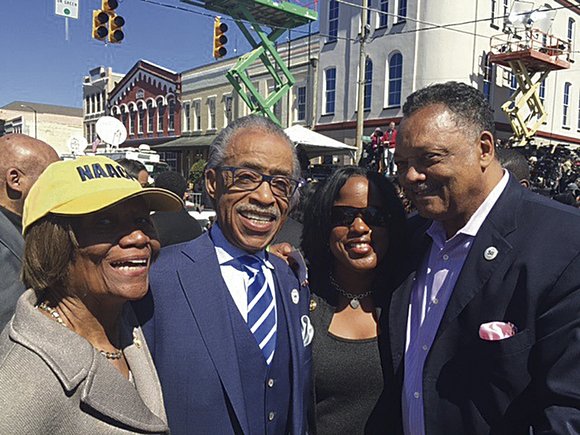 We should not be surprised that the Revs. Jesse Jackson and Al Sharpton would deliver New Year’s messages with a similar resonance, evoking Scripture, history and the Civil Rights Movement.

As if anticipating Jackson’s stirring op-ed in Monday’s New York Times that focused on the Emancipation Proclamation and the fact that 2019 will mark the 400th anniversary of the forced arrival of Africans in the Americas, Sharpton observed that the international slave trade was an immigration policy. “And the first commodity was a Black body,” he told the audience Saturday at the National Action Network.

Moreover, to underscore his point, he discussed the “Door of No Return” on Goree Island off the coast of Africa and how important it was to remember that for all the millions who would never step back through that door, President Barack Obama did.

“Countless number were taken from Africa as slaves, and a Black man walked back trough as president,” Sharpton exuded.

At the opening of Jackson’s comments was an epigraph from Exodus: 13:13—“Then Moses said to the people, ‘Commemorate this day, the day you came out of Egypt, out of the land of slavery, because the Lord brought you out of it with a mighty hand.’”

With this piece of Scripture, Jackson connected the determination of the Hebrew people with the relentless fight for freedom waged by Black Americans.

“Yet in the darkness of chattel slavery,” Jackson wrote, “the enslaved were able to sustain enough of their humanity to maintain a light of hope for a better day, for freedom and for equality. African-Americans were able to see the dimly lit outlines of a more just social, economic and political order, even during slavery, apartheid and centuries of discrimination. But Black people did not wait for freedom to fall from the sky. The Colonial era and beyond bristled with slave rebellions and resistance.”

For his Scriptural reference, Sharpton cited the courage and leadership of Gideon, from the Book of Judges from the Hebrew bible. “He felt he was unworthy to lead his people,” Sharpton said, but in the end he was successful in battle, overcoming his adversaries in the same way Rosa Parks “had broken the chains of slave mentality.” He added, “And keep in mind that there were other Blacks on that bus.”

In their own special way, each leader addressed the current political and social climate. Although Jackson did not mention Trump’s name, his inference was clear when he noted, “The lies, myths, and insanity of white supremacy contaminated the soil and the soul of America.”

He continued, “The Academy said African-American minds were inferior. The medical establishment said our bodies were inferior; the church, our morality. The banks determined that we were unworthy for loans or investment. These barriers have yet to be completely broken down. We are free but unequal. Yet still we rise.”

On the other hand, Sharpton was more direct in assailing the president. “We have the most reactionary and backward president in our history,” he charged.