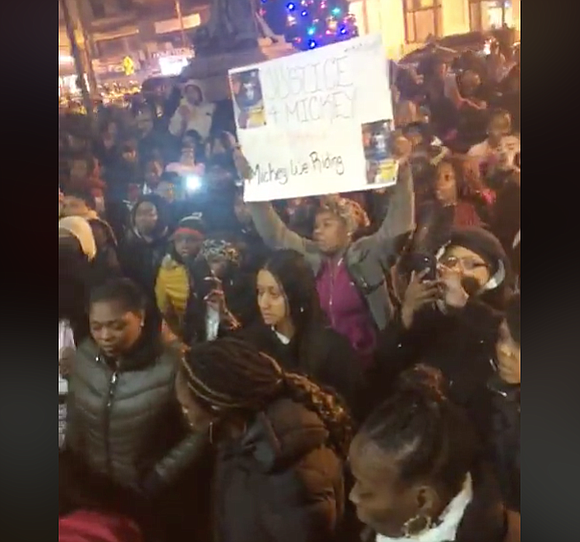 “I want justice,” the mother of 27-year-old Jameek Lowery, Patrice King, said this week at a Paterson City Council meeting. “I’m not going anywhere until I get the truth.”

The community is outraged and a family is demanding answers after Lowery’s death. Many allege he died after being assaulted by police.

Reports indicate that Lowery walked into Paterson Police Headquarters asking for water early last Saturday. In a Facebook Live video lasting one and a half minutes shot by Lowery, he is seen sweating and foaming at the mouth asking police for help. The officers reply that they aren’t allowed to give him any.

“I need water,” Lowery can be heard saying on the video. “Can you please give me some water? Y’all gonna kill me. They’re going to kill me. Please help me. She’s grabbing her gun. Please don’t kill me. They want to give a reason to shoot me. Ma, I’m sorry. They are going to kill your baby boy. All right, go ahead and kill me.”

The video ends and it’s what happened next that remains a mystery.

Police officials say Lowery initially walked to the Paterson Police Headquarters from a fast food restaurant. Earlier that night, he called an ambulance for himself and was taken to St. Joseph’s University Medical Center. Reports indicate that he had taken the drug Ecstasy.

Lowery later called for another ambulance from the fast food restaurant but ended up at police headquarters. Officers say they weren’t able to give Lowery water according to policy because they didn’t know how his body would react. They called an ambulance and Lowery was taken to the hospital, where he died two days later.

Family members say Lowery had a broken cheekbone and fractured eye socket when he died. They believe officers assaulted him in the ambulance. In a statement released by Passaic County Prosecutor Camelia M. Valdes, it was reported that police didn’t use any excessive force and that he was not hurt.

Speaking to the family during the City Council meeting, Paterson Police Director Jerry Speziale said an autopsy will be conducted to find out what happened.

Protesters take to the streets over mysterious death of Jameek Lowery

Activist and blogger Zellie Imani said most of the people at the rally were youth who were fed up with police abuse. He said further action is being planned.

“Instead of answers, we got tear gassed,” he said. “That won’t stop us. Our radical movement is youth-led.”