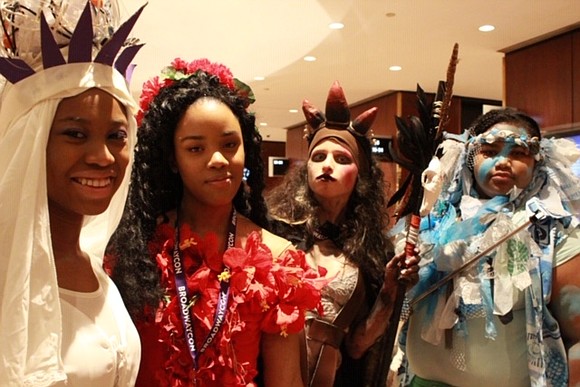 Every year now I look so forward to an annual event that celebrates Broadway and is a theater-lovers dream, and that is BroadwayCon produced by Mischief Management. At the fourth annual one this year, which took place Jan. 11-13 at the New York Hilton Midtown, it was three days of theatrical delight! Broadway show casts members, Broadway merchandise at the BroadwayCon Marketplace, Broadway souvenirs, Broadway sing-a-longs, singing contest searching for Rising Stars, Broadway panels, theatre workshops, autograph and photo sessions with Broadway stars, acting and dancing workshops. There was so much for the Broadway pallet, my plate runneth—over!

Topics for panels were so diverse, talking about supporting mental health in the theatre industry; tracking RENT cast members, the history of Drag on Broadway; careers in entertainment: producers; Political Musical theatre; the life of a Child on Broadway; to just name some. There were Meetup sessions for Disney Broadway fans, Sondheim fans, Hamilton fans, LGBTQIA, All Broadway fans, and a celebration of the 75th Anniversary of Rodgers & Hammerstein’s “Oklahoma.” There were too many panels, workshops and numerous activities to name them all.

On the Saturday, I had the honor and privilege of moderating a panel with Black female playwrights that included Lekethia Dalcoe, Dael Orlandersmith and Ngozi Anyanwu. These ladies talked about what inspired them and what they try to do with their plays. They shared that they don’t write plays for any particular audience, but write about issues that are important to them. They also shared that the label of Black female playwrights is not a good thing. Yes, they are Black, yes they are females, but the label is not necessary and can hold restrictions. They should not be limited on what they can write about. As Orlandersmith remarked, “You don’t hear Eugene O’Neill referred to an a White male playwright.”

On the Sunday, I had the pleasure of moderating a panel with LGBTQIA playwrights that consisted of Patricia Ione Lloyd, Donya R. Love and Jeremy O’Harris, these playwrights became very passionate as they talked about the importance of creating works that represent their community. Lloyd’ play “Eve’s Song,” as well as Love’s plays, “Sugar In Our Wounds” and “Fireflies” focused on the LGBTQIA community in a way that enlightened the audience and brought it gently into this community. O’Harris’ play “Slave Play” was a more in-your-face type of somewhat brutal staging of the violence that has been perpetrated on Blacks by White people. So, these writers had very different approaches to what they wanted the audience to see. As they spoke in the panel they explained why they wrote as they did. Lloyd stating that she wanted lesbian to know, “I see you.” Love explained that he wrote his work from a place of needing to heal and found healing in his work. O’Harris stated that he likes to shock people, because if they are shocked then they will continue to talk about the work, long after they have seen it. These playwrights were so passionate about the difficult judgements that sometimes face LGBTQIA playwrights that it was realized that I want to do this topic again next year, but as two sessions.

As I walked around BroadwayCon 2019 it was just marvelous. There were representatives from Stella Adler Studio of Acting, Young Actor’s Theatre Camp, The Broadway Star Project and more. As I passed by the Golden Age Singalong room, fans were performing the classics as the original Broadway recordings played. People were singing songs from “Camelot,” “The Music Man,” “Hello Dolly,” and they were having just, the best time-ever! It was a riot! People were not just singing, they were dancing and dancing off-the-cuff with strangers, recreating priceless BroadwayCon moments and feeling great! There was a Broadway Museum with paintings and miniatures from Broadway shows.

One vendor out of the 70 that were there was Literary Alterations and they sold some of the most amazing looking bracelets, necklaces, pins and charms from Broadway shows, books, movies, TV shows, and cartoons.

You must plan to go to BroadwayCon 2020, it will be something you will never forget! BRAVO Mischief Management!