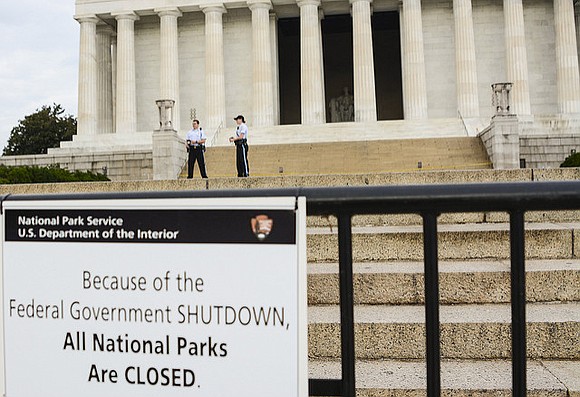 The Lincoln Memorial during the government shutdown Scott Kirkwood/NPCA

More than 800,000 Americans who keep the government running are on the financial edge because of President Donald Trump.

After one full month since the president shutdown the government, federal workers have resorted to food banks, online fundraising and temporary reprieves on payments to cope with not receiving a paycheck for their work. By the end of this week, the government shutdown will cost just as a much as Trump is demanding for his southern border wall ($5 billion).

“AFGE wants the U.S. Senate to reopen the government as quickly as possible,” said Gabriel Pedreira, legislative and political organizer for the American Federation of Government Employees District 2, to the AmNews. “Eight-hundred-thousand workers and their families are currently being held hostage by petty partisan politics. It is time for Leader McConnell to pass the appropriations bills that have already been passed by the House. We can debate immigration and border security at a later date. Bills are piling up for 800,000 workers and their families. The Senate must act now.”

This annual Day of Service is known as “Done in a Day for MLK.” Both facilities are in areas that face some of the highest rates of food insecurity in all of New York City.

Margarette Purvis, president and CEO of Food Bank For New York City, said that her organization is doing the best that it can to offset the government’s (in)action.

“The government shutdown has already meant thousands of federal workers and contractors remain unpaid, disrupting the lives and tightening the daily household budgets of many who are living paycheck-to-paycheck, and could have a tremendous, damaging ripple effect on vulnerable, low-income families who rely on food assistance programs like SNAP, WIC and TEFAP [commodities],” said Purvis in a statement. “While the federal government has assured us that some of these critical survival resources will be fully funded through the end of February, New York City’s emergency food network cannot meet the surge in need that will result if the shutdown continues and funding for SNAP and other essential programs runs out.”

The government shutdown has gone on for so long that some of Trump’s own supporters are starting to blame him for it. A recent survey conducted by NPR/PBS News Hour/Marist University showed that Trump’s net approval rating dropped seven points since December. Among suburban men, who tend to be white, his approval ratings dropped by 18 percentage points net.

Tuesday, the Food Bank For New York City collaborated with Stop & Shop supermarkets to distribute food at the Barclays Center to federal workers affected by the shutdown. The pop-up distribution outlet provided food, “vital products” and other resources.

More than 600 people showed up in three hours.

“To put the capacities of these safety nets and the levels of need they are equipped to handle into broader context, SNAP is our first line of defense against hunger, providing the same number of meals in 10 weeks as the entire emergency food network provides in a full calendar year,” stated Purvis. “With 1.6 million New York City residents relying on SNAP, the heroic efforts of our city’s food pantries and soup kitchens will not be enough to feed every New Yorker who rely on this program.”

“Many of our neighbors in Brooklyn and throughout the city have been directly impacted by the partial government shutdown,” added Heather Hall, senior director of Community Relations for BSE Global and representative for the Barclays Center. “Our venue is a hub for the Brooklyn community and as such, it was important for us to partner with the Food Bank for NYC to help provide food and essentials to those in need.”

On Long Island, New York State Senator Jim Gaughran and the AFGE dropped off donations of food and supplies to Long Island Cares’ Huntington Station location this Thursday as the shutdown entered Day 34.

“The federal shutdown has now lasted more than a month, putting an undue burden on hard working families during a challenging time of year,” said Gaughran. “I’m proud of our efforts to help workers affected by the shutdown and encourage workers to continue calling my office for assistance.”

Trump is holding the government hostage for border wall funding and continued to up the rhetoric about migrants making their way to America. While giving remarks on the alleged humanitarian crisis on the southern border Trump spouted unfounded claims about the migrants.

“Thousands of children are being exploited by ruthless coyotes and vicious cartels and gangs,” said the president. “One in three women is sexually assaulted on the dangerous journey north. In fact, many loving mothers give their young daughters birth control pills for the long journey up to the United States because they know they may be raped or sexually accosted or assaulted. Nearly 50 migrants a day are being referred for urgent medical care.”

Meanwhile, Purvis said she’ll continue to work with federal workers affected by the shutdown to supplement whatever SNAP and other public assistance programs can’t provide.

“We are working closely with government agencies to better understand the implications if the shutdown lasts into February and urge all New Yorkers to contact their elected officials and let them know that the city’s emergency food network cannot bear the brunt of political gridlock,” she said.