The tux jumpsuit is news! 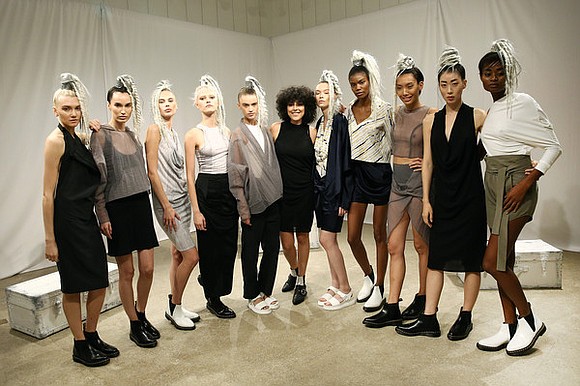 Designs by Rinat Brodach for spring/summer 2019

The jumpsuit created by designer Rinat Brodach made a fashion statement on Billy Porter for the 24th Critics’ Choice Awards. Porter was nominated for the Best Actor in a Drama Series for his role in Ryan Murphy’s FX series, “Pose.” Brodach focuses on androgynous looks and minimalist, draped and unisex clothes.

The tux jumpsuit explores the dialogue between male and female energy. With regards to fashion looks, it is a reinterpretation of the traditional tuxedo. In fine silk, the jumpsuit features asymmetrical lines and an oversized cummerbund bow. “Billy Porter is the definition of real and raw,” said Brodach as she reflected on the steps of creating this look. “Working with him has been so much more than fashion. He is proof that focusing on rejection and criticism shows what true artistry is about. It was such a pleasure to work for him and Sam Ratelle to produce this style. I appreciate them both for trusting me on this level.”

Another new piece in her collection is the twisted pant, with draping and a deep V-shaped front.

Porter, a champion for rising talent, said, “Young designers like Rinat bring such incredible passion, raw talent and energy to collaborations. I myself, I believe strongly in giving opportunity and exposure to new talent. This jumpsuit is fierce.”

A New York-based designer, Brodach is Israeli-American. Her desire to be a fashion designer and to see fashion as expression was evident from an early age. Her exploration of fashion led her to study at both the Academy of Art University in San Francisco and the Chambre de Syndicale de la Couture Parisienne in Paris. Focusing on minimalistic, draped, gender-neutral clothing, Brodach’s designs show a gentle interplay between androgyny and sensuality.

RRR Creative is a New York City-based boutique that specializes in branding, graphic design, communications, styling and lifestyle consulting. They implement culture, current and future, and also focus on the power of imagination. They collaborate with a variety of artists and professionals to shine the light on their unique qualities with vibrant compelling storytelling.