After being spurned by KD and Kyrie, all the Knicks can do is move forward 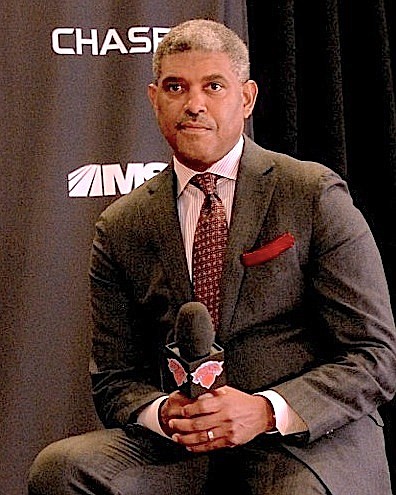 The Knicks shouldn’t have to apologize, offer mea culpas or craft suspect narratives to save face after being spurned by unrestricted free-agents Kyrie Irving and Kevin Durant. The duo decided that the Brooklyn Nets and not the Knicks presented a more viable opportunity on the court and that their burgeoning enterprises outside of basketball would continue to grow without being part of the Madison Square Garden brand.

The Nets won, the Knicks lost. While it is a crushing defeat for an organization that fully expected to sign two of the game’s best players this summer when they traded Kristaps Porzingis to the Dallas Mavericks last January, clearing salary cap space for two max contracts, it is a painful yet valuable lesson for team owner James Dolan, president Steve Mills and general manager Scott Perry.

The trio can no longer sell the outdated and distorted talking point that the Garden is the Mecca of basketball and the Knicks are one of the NBA’s royal franchises. To Baby Boomers and those of Generation X, MSG still holds a mystique and allure as memories of Willis Reed, Clyde Frazier, Bill Bradley, Patrick Ewing and John Starks are awash in winning.

For Millennials like Durant and Irving, and the Generation Z crowd, the Knicks are low in the NBA hierarchy. Same as the Chicago Bulls, who won six titles in the 1990s led by Micheal Jordan, four more than the Knicks, whose last was in 1973. They haven’t been in the Finals since 1999, when Jeff Van Gundy was their head coach and they were defeated 4-1 by a burgeoning San Antonio Spurs dynasty.

The Knicks’ chief decision makers sold an eager to be convinced fan base that space for two max contracts and the worst record in the league at 17-65 would ensure they would secure transformative talent through free-agency and perhaps the No. 1 pick in the draft. It is arguable that they oversold the notion—with many members of the media being complicit—that Irving and Durant, with Durant being the sun around whom the other stars would rotate, wouldn’t be able to resist the opportunity to be immortalized in New York sports lore by leading the Knicks to a championship. However, objective and pragmatic observers were reluctant to subscribe to the belief Irving and Durant would view the Knicks as glowingly as was conjectured.

Meanwhile, the Nets, while not in midtown Manhattan, are also in New York City, located in increasingly trendy Brooklyn. As the Knicks continued to display instability, changing coaches, general managers and presidents with the frequency of Donald Trump lying, the Nets were building a sound infrastructure, a cohesive front office, possessed a GM in Sean Marks who had a clear vision, installed a smart, dynamic coach in Kenny Atkinson, and nurtured homegrown talent (Caris LeVert and Jarrett Allen) as well as gifted players (D’Angelo Russell and Spencer Dinwiddie) other teams gave up on prematurely. The result was a playoff team last season, and an organization and culture that appealed to two of the world’s best players.

The Knicks have adopted that paradigm with Mills, Perry and head coach David Fizdale. Unfortunately for them, the Nets were well into their fruitful plan by the time they began theirs.