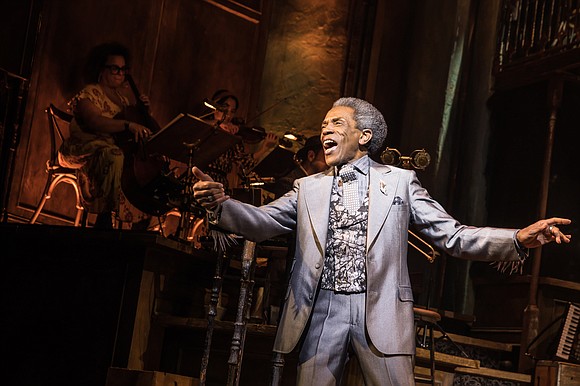 Have you ever felt like you were participating in a historic moment? That’s how I felt as I sat in the dressing room of Andre De Shields, the Outer Critics Circle, Drama Desk and Tony Award winner for his portrayal of Hermes in Broadway’s “Hadestown,” playing at the Walter Kerr Theatre on Manhattan’s W. 48th Street. De Shields’ cozy dressing room is filled with lovely flowers—even lotus flowers. De Shields, pointing out the flowers, remarks, “Hermes botanical gardens, these are all expressions of love from people who were personally invested in me winning that Tony.”

I’ve known and interviewed De Shields many times over the years and what I’ve always been able to appreciate about Andre is that he speaks so beautifully and clearly, carefully chooses every word he utters. He is someone who always speaks from the heart; you know when he speaks he is telling you his full truth and you can respect his candor. I’ve never known anyone like Andre De Shields. He is a consummate professional on stage who completely embodies his character and is dedicated to his craft. I so looked forward to the opportunity to interview him, and am thrilled that during his 50th year in the business and at the age of 73 he has won his first Tony. And it seems this is a magical year and a magical role, as it has also earned him the Drama Desk and Outer Critics Circle Awards as well. De Shields is not just a phenomenal performer, but also a very educated and giving man. He gives of his knowledge, his time and his life experiences, and was truly put on this earth to stand out and demonstrate what many forms beauty can take. Beauty of performance, beauty of the soul, beauty of love of the craft and a level of sophistication, common sense, patience and civility that is a feat to master.

Andre has taken decades to establish his style on Broadway from musicals like “The Wiz,” “The Full Monty,” “Ain’t Misbehavin’,” and “Play On,” and anyone who has seen him on the stage has witnessed flawless, intense and engrossing performances, one after the other. De Shields is the embodiment of consistency and never disappoints the audience. Sitting in his dressing room between performances he talked about this role of Hermes, his process, his family, his nature.

On getting the Tony, Drama Desk and Outer Critics Circle Award for Hermes in “Hadestown,” De Shields said, “It took a minute to get there. I had spoken to that in part by what I said when I accepted the Tony. Slowly is the fastest way to get to where you want to be. We’ve known each other for many years and I think you know me well enough to understand that my modus operandi, my method, my technique is very measured—it’s deliberate. I believe differently from most people. Most people say life is short. I believe life is long. Which is why I take it very seriously and how one believes is how one receives from the universe. So, if I were in a hurry, I might have gotten the Tony for ‘The Wiz’, but then I would have been off my destined path.”

Why does De Shields do what he does? “Do it for the art, the idea is that simple. And if you do it for the art, you’ll get done what you’re supposed to be doing. I learned from Sammy Davis Jr. who said, ‘every entertainer’—and who’s a greater entertainer than Sammy Davis Jr. —‘every entertainer has two contracts, one with his employer and one with his public.’ You can always get another employer. Meaning that one has to embrace his public as sacred. They come to the theater; they come to the temple where the healing happens. You’ve seen the show, so you know it ends with a communion and everyone stays for the communion and stands for the communion. When that congregation leaves, we have had a sacred two and half hours together,” De Shields reflected.

Responding to how he became who he is De Shields shared, “You have just hit on one of my rules to live by and I don’t try to convert anyone. But just as they say if you see something, say something. I say if you know something, share something. So, I don’t give advice, but I do tell people what I have experienced. Here’s the lesson, here’s the rule and I’m speaking to whatever individual is going to read the words you’re going to transcribe, ‘There is no one like you. There has never been anyone like you. And there shall never be anyone like you. Therefore, know thyself, be thyself.’”

De Shields continued, “I have a contract with myself that I make on a daily basis. Everyone gets up and has some kind of ritual. I look in the mirror and I speak to the person who is looking back at me and I say, ‘I will always love you; I will never forsake you. I will do with you what the spring does to the cherry trees. I will cause you to blossom. I believe that one of the necessary elements to live a long and happy life is beauty. Beauty is one of the elements like water, fire, air, earth—beauty. That’s what keeps us strong, optimistic, that’s what keeps us looking forward to the next day, the discovery of beauty,” De Shields explained.

Ninth of 11 children, De Shields’ parents were Mary Elizabeth Gunther who cleaned homes and took care of other people’s children, and John Edward De Shields, a self-taught tailor. Sharing his family history, De Shields explained that his heritage is Scots-Irish indentured servants and enslaved Blacks. “Samuel Shields was an indentured servant on a French plantation. He took as his concubine a slave named Dulci, so he owned her. He took on the practice of putting De, which in French means property of and called her Dulci De Shields. She had two sons, James and John. I come from the John branch. That’s why it’s so very important for us African-Americans to know who we are. During the Middle Passage when the Africans were kidnapped, some of them were royalty, so here’s my belief. I descend from some African king that they captured and turned into a slave. That’s the only way I can explain the way I am. It’s not cosmetic; it’s not manufactured. I’m authentic.”

De Shields marvelously explains when he knew he wanted to be an actor, “From the day I was evicted from my mother’s womb.” De Shields took to the stage to be a dancer, a dream his mother deferred and a singer, the dream his father deferred. De Shields said, “My parents’ deferred dreams had to be in the X and Y chromosomes of one of the children. It was lucky No. 9. I’ve never doubted the purpose of my life. I was put onto my path when I was evicted from my mother’s womb to fulfill my destiny. When I dance, I’m using my mother’s feet, when I sing, I’m using my father’s voice and I’m always in conversation with them.”

Describing his character Hermes, De Shield reflected, “Let me answer that in the context of my career. When you witness Hermes you’re seeing a bit of ‘The Wiz’, a little bit of the big Black man from ‘The Full Monty,’ a little bit of the Viper from ‘Ain’t Misbehavin,’ a little bit of Jester from ‘Play On,’ and a lot of Andre De Shields, because of all those roles this is the one that is the result of my maturity as an actor. My craft maturing as an actor for the past 50 years. Hermes is a griot of the first caliber. I say that philosophically, but I also say that in a literal sense because in the process of inhabiting that character I had to memorize the oral history of every other character in the show. As Hermes I am responsible for the culture that the audience has come here and gathered their moments of joy and catharsis from. He is the knowledge keeper of the culture that they are experiencing. When the designed gaps in the show occur it is Hermes who steps in and says this is what you just experienced. This is what you need to go on to the next experience. So that when you finish on this journey, you will have this necklace of pearls of wisdom that you can apply to your own life.”

De Shields’ shared his process. “Will this character, will this project benefit from me taking on this role. If it won’t I’ll pass on it. I’m about sustaining the arts. I’m about having longevity in my craft. So, I can’t just be arbitrary how I invest my time, my energy, my love, my juices. If so, then nothing else matters. Take a deep dive and do it. If it doesn’t benefit it, pass it and keep going.”

When does De Shields have time to relax? “When I’m not on stage. I read a lot. I spend a lot of time being silent, listening to that small voice that is inside of me. You have to deny distractions and hear it, because it tells only the truth.”

Future plans for De Shields include working on a cabaret show, where he charts his career through song. “I’m interested in doing a memoir, I’m going to start forming it musically. I’m going to form a cabaret performance and call it ‘Andre De Shields: Memoir,’ so anyone who is interested in when, what, where, come to that show and you get answers to those questions.”

Considering the legacy he wants to leave behind, De Shields replied, “Is that the same thing as describing what I want on my tombstone? ‘Once upon a time there was a king’—that’s it.

De Shields past awards have also included an Outer Critics Circle Award for “The Full Monty,” an Emmy Award for “Ain’t Misbehavin,” an Obie Award for Sustained Excellence of Performance; nine AUDELCO Awards and the National Black Theatre Festival’s Living Legend Award. To find out other honors this theatrical icon has just Google him and you will see many more.

But, in the meanwhile, go to the Walter Kerr Theatre and see this living legend on Broadway!