Minisink celebrates a legacy of service 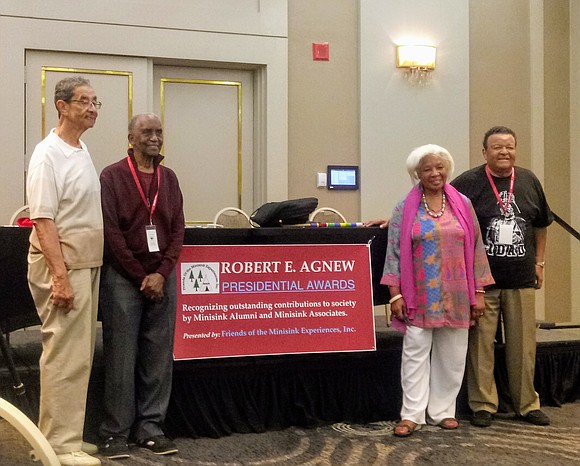 For those who are Harlem natives, the name Minisink carries memories of fellowship and excellence.  Over the years, youth have been empowered and educated in leadership and volunteerism through the various program offerings of the Minisink legacy. As the landscape of Harlem has changed, The Friends of the Minisink Experiences, Inc., also known as F.O.M.E., upheld a mission to embody the traditions and commemorate the history of Minisink programs.  This nonprofit organization is composed of past campers, counselors and members who participated in the many programs offered under the Minisink umbrella.

The Order of the Feather

The Order of the Bonnet

Celebrating the 90th anniversary of Camp Minisink, the Friends of Minisink Experiences organized and hosted a weekend full of events at the LaGuardia Plaza Hotel. Among the many events of this past weekend, a large group of Minisink alumni traveled to the second camp grounds of Minisink in Dover Plains. Even with the loss of campgrounds in both Port Jervis and Dover Plains, the Minisink camping experience has not been forgotten by those who were nurtured with this nature experience.

For those alumni who did not take the journey to camp, a nostalgic panel discussion was facilitated by current F.O.M.E. President James Pruitt, honoring the recipients of the Robert E. Agnew Presidential Award. The late Robert Agnew leaves his own legacy as a highly regarded past president of F.O.M.E. Like Robert Agnew, the recipients of the award have dedicated their lives in the service of others. They have represented the Minisink legacy both locally and internationally in their humanitarian pursuits.

Honorees included Ambassador Theodore Britton, a Congressional Gold Medal Marine Corps veteran who served as an “Ambassador for Peace” under three presidential administrations. Another honoree was Lord Irving Louis Burgie, also a WWII veteran who trained classically at the Julliard School of Music.  Burgie became a songwriter of folk and calypso songs such as “DAY-O!,” a well-known tune originally popularized by Jamaican-American performer Harry Belafonte. Louis Burgie’s songwriting linked the civil rights struggle to the Caribbean colonies’ quest for independence and his musical legacy is now showcased on Broadway. Also honored was Walter J. Clarke, a Vietnam veteran of the 82nd Airborne Division who served the community as a principal, headmaster, city administrator, minister, Kappa Alpha Psi Fraternity member and developer of nonprofit organizations. Yet another honoree was Nat Sowards, a past camp Minisink counselor who continued the traditions and philosophy of Minisink fellowship by forming the Van Ness Little League.  Coach Sowards instilled the tenets of teamwork, respect and professionalism in team members who later grew to build careers in government, medicine, engineering and education. The final honoree, although she was the only female on the panel, has blazed a trail of international influence. Dr. Lenora Taitt-Magubane was a member of the Student Nonviolent Coordinating Committee and challenged segregation in the south as a Freedom Rider during the 1950s and ’60s. This civil rights activist continued to seek equality for all people as she coordinated social services for refugees in Zambia and facilitated United Nations programs in South Africa.

The honorees and the Minisink family who celebrated 90 years of the Minisink legacy continue to seek cooperation with organizations and educational institutions to connect the leaders of tomorrow with the traditions of the past. The Friends of the Minisink Experiences, Inc. maintains the commitment to encourage youth to be contributing members to their community and society. As these traditions of citizenship, cooperative economics, fellowship and scholarship are continued, F.O.M.E. will be one of the many community organizations to develop the next generation of world changers. For more information about Minisink history, F.O.M.E. and the active affiliates of Minisink traditions, visit www.friendsofminisink.com.