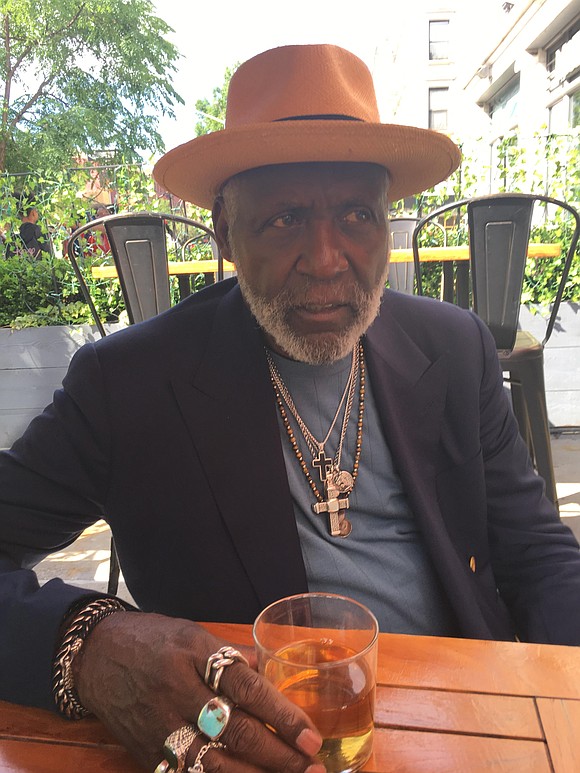 The original Shaft, Richard Roundtree, is back giving just as much fire and hip attitude as you’ve come to expect and love in “Shaft’ circa 2019. So much of his role in the film is a surprise so I won’t provide a single spoiler but I will add this, in this version he’s not lost his touch.

In this version, John Shaft Jr. (Jessie T. Usher) plays a by-the-book cybersecurity expert with a degree from MIT who works for the FBI. To uncover the truth behind his best friend’s untimely death, he needs an education only his dad, Shaft (Samuel L. Jackson), can provide. Now a hard-nosed detective with his offices and his home located inside the historic New York Amsterdam News building, the always locked-and-loaded Shaft agrees to help his progeny navigate Harlem’s heroin-infested underbelly.

And who else knows the ins and outs of Harlem life but the original Shaft.

We caught up with Richard Roundtree at the press junket for “Shaft” held at the Red Rooster in Harlem. Sipping slowly on a glass of scotch here is what he had to share about being a part of the Shaft legacy.

AMN: Wow. When you first stepped into the role in 1971 did you imagine that in 2019 you would still be playing Shaft?

RR: No. No. Not at all, no. Come on, come on. I was so green and so happy to be in a major motion picture I wasn’t thinking past that year. I had an MGM contract for 12 pictures. I was 28 years old and I am in a starring role in an MGM motion picture and then as we go along, Isaac Hayes comes and does the theme song and he wins the Academy Award (1972) for “Theme from Shaft” for Best Original Song. That was the only Oscar ceremony that I attended. He wins that night. It was grand (laughing). It was grand. It was a very heady time, 1972.

AMN: But it does not end there.

AMN: What about playing a grandfather? I mean Shaft, meaning you, is still cool and deadly in this film. Not trying to give away any spoilers but he’s still a badass.

RR: (laughing) He’s Shaft. Well, Jessie [T. Usher] plays my grandson, Jr. aka Shaft Jr., to see the transition that he goes through and eventually earn his dad’s name is great. It’s a great turn. The relationship between him and his dad is great.

AMN: When you read the screenplay the first time, did you laugh?

RR: Not the first time. Maybe the third time but that’s also my ego. I kept flipping the pages and looking for my role. I wanted to be in the film more.

AMN: But you are John Shaft, can you dig it? Who is the man that would risk his neck for his brother, man? (Shaft)

Can ya dig it?

Who’s the cat that won’t cop out when there’s danger all about? (Shaft)

But I’m talkin’ about Shaft (Then we can dig it)

RR: (laughing, hard) I can’t believe you said that out loud.

The film will be distributed in North America by Warner Bros. Pictures. This film has been rated R for pervasive language, violence, sexual content, some drug material and brief nudity.