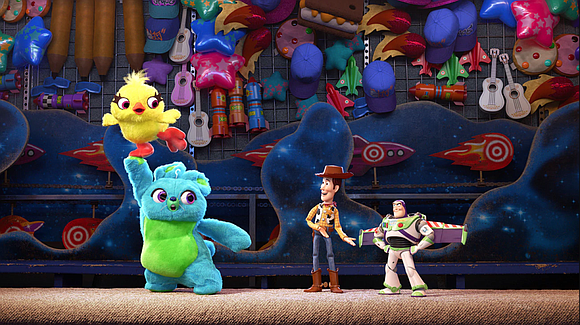 Woody (Tom Hanks) is back and so is Buzz Lightyear (Tim Allen) and the rest of the gang and in this new chapter, they are involved in Bonnie’s first day of kindergarten, a family road trip and the discovery of an antique shop where sad old toys hope for a second chance.

The fourth installment is a bold move for Pixar and keeping their treasured characters alive and well (and minting money) is what this studio believes in doing, and they do it right.

“Toy Story 4” explores the fact of life, meaning what was once new and shiny eventually gets old and dull and is replaced. It’s the cycle of life, but for toys. What makes all of this absolutely brilliant is that the film lies in the characters’ repeated demonstrations of loyalty and responsibility—to their owners and to one another. They are “ride-or-die” and that may be why we love all these wacky characters so much. God bless his little toy soul, dear Woody has a “Leave no toy behind” policy which is underscored via a daring rescue in which the pull-string cowboy saves RC when the car is left in the yard during a storm.

You know kids. They lose toys all the time, and Woody saved Buzz from an unkind neighbor, Si, so many years before. Now, this courtesy is extended to a new addition: Forky, a plain old plastic spork that Bonnie transforms into an original plaything. This rings true of the power of the imagination. On her first day of kindergarten (a big deal), Bonnie makes a friend of the aforementioned Forky with its pipe-cleaner arms with popsicle-stick feet and googly eyes, all repurposed from the trash bin and held together with clay.

Forky (voiced by Tony Hale) is a fish-out-of-water in a community of such unique creatures. Created out of Bonnie’s mind (and essentially an eating tool) he has no skin in the game when it comes to Bonnie’s happiness but instead longs to return to the trash. It’s a delight to listen to songwriter Randy Newman’s “I Can’t Let You Throw Yourself Away,” when our hero Woody repeatedly tries to save Forky from his suicide attempts.

“Toy Story 4” screenwriters Andrew Stanton and Stephany Folsom deliver a layered story where laughter and deep thought live side-by-side. One touching moment is when Forky and Woody, who break away from the gang during a road trip to Grand Basin National Park, take a detour through an antique store displaying Bo Peep’s lampstand in the window. Talk about an eye-opener!

This strange place is filled with bric-a-brac and cobwebs and is overseen by Gabby Gabby (Christina Hendricks), a vintage pull-string doll desperate to find a replacement for her broken voice box…just like the one sewn into Woody’s torso (yikes).

Not to offer any spoilers, but let’s just say Buzz goes on a mission during which he meets a pair of snarky carnival prizes—conjoined Bunny (Jordan Peele) and Ducky (Keegan-Michael Key)—and Giggle McDimples (Ally Maki), who offer assistance and a lot of comic relief. Buzz and Woody learn an important lesson about acceptance and transformation that only Bo Peep can teach.

It’s been a minute—nearly a quarter-century—since the original “Toy Story” and this fourth installment is just as good; now it’s better.