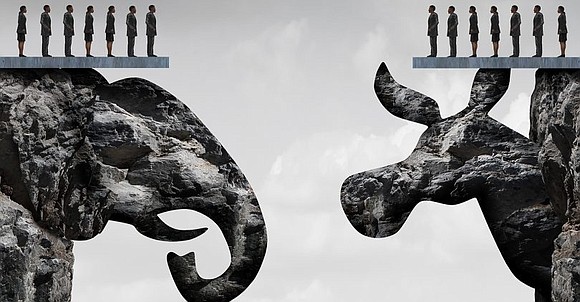 Some believe that African Americans as a whole will ever be convinced that the Republican party has the community’s best interest in mind. Photo: iStockphoto / NNPA

It's likely that identifying as a Republican today isn’t as easy as it once was, particularly with President Donald Trump’s policies that have included separating children from parents; the administration’s escalating racial rhetoric; and a special counsel report that strongly suggests the nation’s commander-in-chief committed crimes that may not just end with obstruction of justice.

And, as tough as it is for White GOP members to identify with the party (See: Michigan Rep. Justin Amash’s declaring his independence this month and leaving the party) African American Republicans may have an even more difficult task of letting people know where they stand.

In fact, prominent Republicans like South Carolina Sen. Tim Scott and Telly Lovelace, who once was responsible for African American outreach, press strategy and field engagement for the Republican National Committee, nixed requests by the NNPA Newswire to detail life as a Black Republican.

We also reached out to others without success including Herman Caine, Condoleezza Rice, Dr. Ben Carson, and Armstrong Williams.

Perhaps they weren’t able to articulate what former RNC Chair Michael Steele could – “I mean, you know, people don’t ask Democrats that question when they had their crazy left-wingers out there,” Steele said.

“The principles are still valid,” he said before offering a reminder of what he told a Washington Post reporter in 2018.

“You invite me over to a nice dinner and I come to your home. And during the course of that evening, I start breaking your china. I start slicing your drapes, tearing up your carpet, putting holes in your walls.

“So, at that point, do you leave, or do you kick my ass out? You’re going to kick me out. That’s where I am. I’m not leaving. This is my house.

“I know I gotta repair the drapes and patch up the holes in the walls and replace the carpet. But your ass will be gone and that’s the goal,” Steele said.

Shekinah Monee, of Perfect Vision PR Company, said as a Republican in the current climate it’s often difficult when she discusses her views to fellow African Americans who don’t favor her party.

“My mother blames my boyfriend for my party change, although my views have never changed,” Monee told NNPA Newswire.

“I had to reevaluate my views and why I was with a [Democratic] party that did not support me. While I have always been conservative, I was told as a black woman I must be a Democrat. I attempted to become a Republican several times, but the Board of Election kept keeping me as a Democrat. I finally became a Republican in 2019,” Monee said.

“I think that the African American community truly needs to read and know their history. I think that a lot of people dislike a person and let it speak for the party,” she said.

“There is no consideration taken about the entire picture. Also, we must hold everyone to the same standards,” Monee continued.

Having worked in Republican politics for 15 years and being the head of the only black GOP political campaign consulting firm, Richard S. Holt said his experience shows that having an all-white administration makes many African Americans believe that the party is racist.

“My friends and family understand this narrative and how it works in terms of the politics of race,” Holt said.

“My father was very conservative and hated the Democrats who he saw as holding back black progress. As I grew up, I began to get a better understanding of his ideas,” said Holt, whose father was the first in his family to get a college degree and the first black chemist to graduate from his college,” he said.

“I was taught a very ‘up by the bootstraps’ idea that we had to be smarter, be wiser, and work harder than whites to get ahead,” Holt said.

“Once I read the book, ‘Conscience of a Conservative,’ in college back in 1999, I was sold on conservatism overall,” he said.

Holt did say he disagreed with the author’s ideas on the Civil Rights Act, but the overall philosophy of conservatism just made the most sense for the kind of America he wanted to live in.

Jonathan Farley, whose father is a native of Guyana who holds a Ph.D. from the London School of Economics, and his mother who is Jamaican and holds a Ph.D. in American history, said he’s an independent who voted Republican in the 2018 midterm elections.

“I decided to do that because of the Democratic Party’s support for alternative lifestyle groups and the party’s support for women who make false allegations against men like the #MeToo movement,” Farley said.

Despite his conversion, Farley said he doesn’t believe African Americans as a whole will ever be convinced that the Republican party has the community’s best interest in mind.

“Republicans should make it clear that the Democratic party supports anti-Christian efforts like teaching kindergarteners about transsexuals and Republicans should stop taking the side of neo-Confederate groups and the party should publicly state that Confederate statues need to be removed,” Farley said.