Coco opened, but Serena is now left to close the show 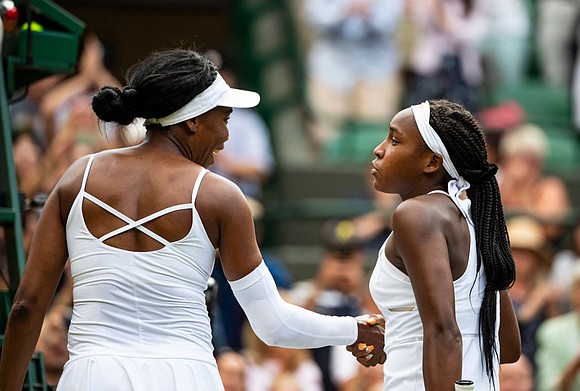 If Serena Williams wins her semifinal Wimbledon match today, she advances to the championship Saturday to play against the winner of Simone Halep versus Elina Svitolina. Williams, turning 38 in September, ranked 11, has already won Wimbledon seven times.

Halep, the 7th seed, defeated young American upstart Cori “Coco” Gauff 6-3 6-3 Monday. Gauff, only 15, ranked 313, impressed tennis fans and the sports world by winning three qualifying matches and three main draw matches to reach the fourth round of Wimbledon, her first Grand Slam singles tournament, becoming the youngest person to do so since 1991.

Wimbledon, played in London, England since 1877, is the oldest tennis tournament in the world and is recognized as the most prestigious. It’s played outdoors and on grass courts, the only one of the four majors to still play on grass.

“I learned how to play in front of a big crowd,” said Gauff, who was born in Georgia and who now lives in Florida. “I learned what it was like to be under pressure. I learned a lot, and I’m really thankful for this experience,” she noted, summing up her first Wimbledon experience.

The young Gauff, expected to be overmatched, opened up the historic tournament with wins giving the tournament an unexpected excitement that was wowing and endearing. Tennis fans there embraced her.

Tennis great Billie Jean King tweeted, “Your journey is far from over.”

Shocked by the love, Gauff said, “It was really surprising, because you don’t really expect this kind of support when you’re in another country.”

Her first victory after qualifying was an upset over Venus Williams, 39, a five-time Wimbledon winner, Serena’s older sister and the oldest woman competing in this year’s tournament.

Gauff idolized the Williams sisters while growing up and has repeatedly noted their influence on her.

“Some of the challenges that they went through made it a lot easier to get into the sport,” said her father Corey Gauff. It gave her mother and father more confidence that she could succeed in professional tennis.

“If somebody told me this maybe three weeks ago, I probably wouldn’t believe it,” Gauff said after her loss Monday.