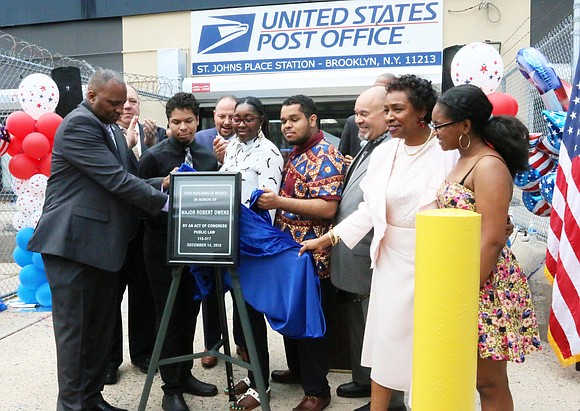 Having come from a humble background and influenced by his father’s philosophy which was patterned after FDR’s “New Deal,” Major Robert Odell Owens knew there was a larger world offering many opportunities. His mother influenced his approach to academics. This encouragement to strive to do your best inspired Owens to say, “There is no reason why I couldn’t go out and scale life’s summits.” And that’s exactly what he did, and why on a bright Friday morning, a contingent of politicians, clergy, family and friends gathered at the Beulah Church of the Nazarene to dedicate the post office located next door at 1234 Saint Johns Place to his great legacy.

One of the many notable politicians to address the audience, Clarke said, “Major led the coalition for community and the future of progressive politics. I am honored to be here with the Owens’ family. Congressman Owens challenged all of us to revolutionize the Postal Service…and employment. Major gave a lifetime of service. He put action to his passion.” In the spirit of Major Owens, Clarke vowed to improve the Postal Service in Central Brooklyn.

Major Owens’ son, Chris Owens, said, “I feel wonderful being part of the process of keeping heritage alive—he was a real progressive congressman. Owens once said, “I’m not ashamed to be called a liberal.”

Maurice Reid, Owens’ first assistant director and longtime friend, remembers “Major as being trustworthy, and any disagreements were about issue only. He was a man of his word.” Owens was a primary backer and a floor manager of the Americans with Disabilities Act of 1990. Owens said that, “Greater than all the physical barriers are the barriers of entrenched attitudes and the silent insistence that people with disabilities should be grateful for minimal governmental protection and assistance.”

Former Congressman Ed Towns served with Major for 24 years. “This is a great day in Brooklyn as we pay homage. Major Owens had tremendous integrity. If he gave you his word, it meant something. Brooklyn was a place he felt very close to and this is a great moment to recognize all the work that he did as a state senator, member of Congress and commissioner in New York,” Towns said.

After the closing remarks by Christopher R. Owens and Elijah Dixon Owens, the procession was led next door for the unveiling of the plaque dedicated to Major Robert Owens. The beautifully crafted plaque will draw the attention of post office patrons for some time to come—they might even be moved to salute.