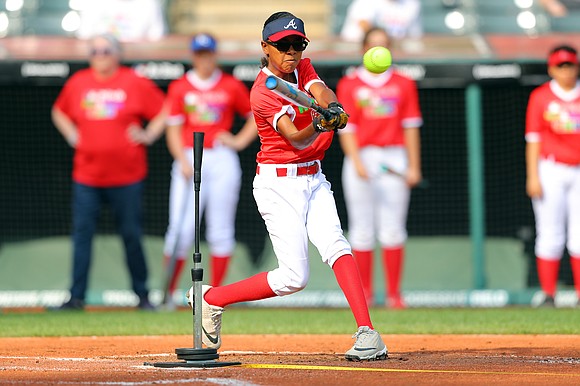 “It’s really exciting and really fun,” said Harrison, who plays short stop on a travel team. “I trained for the competition.”

Harrison was one of 44 finalists ages seven to 14 from around the United States and Canada who came to Cleveland, Ohio to take part in MLB Jr. Home Run Derby and MLB Pitch, Hit & Run, the youth events held prior to this week’s All Star Game. “It’s great to see a player like Mariah that shows development and continued commitment to the game,” said David James, vice president of baseball and softball development at MLB. “We look forward to seeing where her participation in this program leads her next.”

For now, Harrison is looking forward to simply playing the game. The child of two military veterans, there are a limited number of organized sports in the small town in Alabama where they live, so she began playing pee wee baseball at age three. MLB Pitch, Hit and Run competition came to town three years ago, and she earned a trip to the 2016 national final, finishing second. She returned in 2018, finishing first.

“My mom and dad train me,” said Harrison, who won the softball 11/12 division. “They tell me to have fun and also take training seriously. I’m serious and fun at the same time. I laugh, and then when it’s time for me to come up and hit and run, I get more serious.”

When she and her teammates share stories, she gives them details of her adventures. Although Harrison and her parents left before Tuesday’s All Star Game, they did get to attend a concert, the celebrity softball game and the MLB Home Run Derby, at which she and her fellow finalists got to go on the field.

Harrison’s trophy case is beginning to fill up. Her long-term goal is to earn a college scholarship. Harrison’s mother, Elizabeth Harrison-Amos, described her daughter’s success as “exciting beyond words.” “We thought initially this was going to be a once-in-a-lifetime opportunity,” said Harrison-Amos. “It gets more exciting every time.”