‘The Secret Life of Bees’ is buzz-worthy 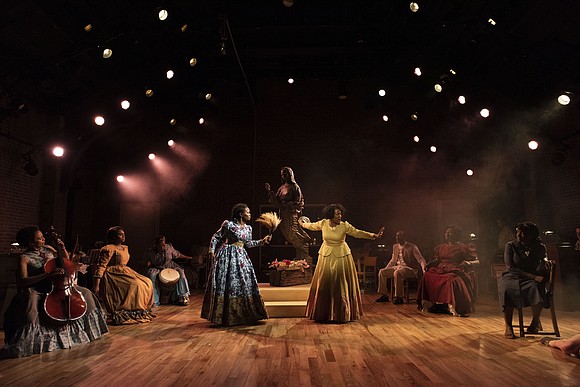 “The Secret Life Of Bees,” running through July 21 at the Linda Gross Theater on West 20th Street, is a life-affirming musical! You will be uplifted by this extraordinary production, based on the touching novel by Sue Monk Kidd with a book by Pulitzer Prize-winning playwright Lynn Nottage. This musical has superb lyrics by Susan Birkenhead and spectacular music by Duncan Sheik.

It tells a story of racism, lies and segregation in the South. It introduces the audience to a young, abused white girl named Lily; her cruel father, T-Ray; and a Black woman named Rosaleen, who cares about and looks out for Lily. After Rosaleen is viciously beaten and imprisoned for trying to register to vote, Lily goes to visit her in prison and breaks her out. On the run, Lily goes to a Black family of three sisters, beekeepers who had known and helped her late mother. The sisters, August, June and May, accept Lily and Rosaleen into their home, their business and their lives; they become a part of the family, and the sisters share with them their unwavering faith and belief in a wooden statue of the Black Madonna, a belief shared by other Blacks in their town.

The singing performances by their cast are the best you will have the pleasure, delight and thrill of hearing and it’s no wonder: August is played by Tony Award winner LaChanze, and Rosaleen by Saycon Sengbloh—those ladies’ voices set the room on fire. They are joined by the amazing vocals of Eisa Davis, who plays June, and Anastacia McCleskey, who movingly plays the very sensitive sister May. Elizabeth Teeter delivers a marvelous performance as Lily, and Brett Gray, an absolutely marvelous singer and dancer, is terrific as Zachary, a young Black boy who helps the sisters with taking care of the bees and develops a forbidden attraction to Lily. The very capable remaining members of the ensemble include Nathaniel Stampley; Manoel Felciano; Joe Cassidy; Romelda Teron Benjamin; Vita E. Cleveland; Matt DeAngelis; and Jai’len Christine Li Josey.

The scenes of worship for the Black Madonna are some of the most spirited, moving and transcending moments in the show. They will have you in tears, but might also leave you with a strong faith in a higher power. This musical takes you to church and makes you feel blessed!

You have to experience “The Secret Life of Bees” and take the young ones with you. Nottage has a definite winner here, and it is enhanced by the spot-on direction of Sam Gold. This presentation of the Atlantic Theater Company has foot-stomping choreography by Chris Walker, fantastic set design by Mimi Lien, lights by Jane Cox, sound by Dan Moses Schreier, hair, makeup and special effects by Cookie Jordan, puppets by AchesonWalsh Studios, vocal arrangements by Jason Hart and a live band on both sides of the stage.