‘Spider-Man: Far From Home’ is a reason to go to the movies again 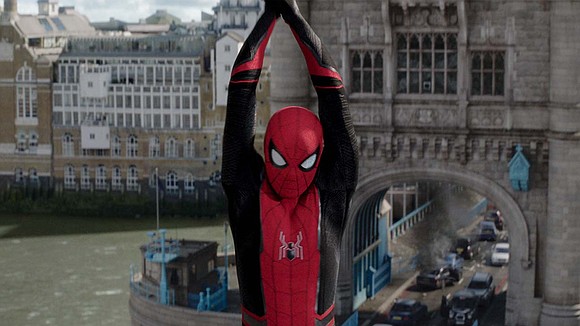 Is “Spider-Man: Far From Home” worth your hard-earned money? Yes, yes it is. You might even kick yourself (hard) that you didn’t spring for that big box of popcorn. What makes it good enough to be an event movie and therefore worthy of getting you out of the house and into a movie theater? Great question—allow me to venture with the most obvious answer, it’s the super kid hero Spider-Man and it’s the actor Tom Holland who gives the character a verve, a confidence nay I say, a swagger that is undeniable.

Here’s where we are. Peter is now 16 and preparing to go to a class trip to Europe—the classic locations, with enough romantic trappings to help him woo M.J. (Zendaya), a girl a bit out of his league. She’s what anyone would call cool, but she wears it like armor because underneath she has a very tender heart.

The trip plays into the pitfalls of first love with a ride over to Venice forcing Peter (seated a few rows away from M.J.) to watch her spark up chemistry with the (now) very handsome Brad Davis (Remy Hii).

We get a look into his world which is charming with all the typical characters one would expect (and love) in a teen coming-of-age movie including the classic nerd, Ned (Jacob Batalon), and a wannabe cool girl, Betty (Angourie Rice).

Back to the superhero part of the story. Young Peter has been given an invaluable and powerful gift by his late hero and mentor, Tony Stark—Tony’s tinted glasses. These glasses are connected to a Siri-like voice named Edith who just happens to command a multi-tracked intelligence system worth billions of dollars. Pretty cool stuff but remember the old saying that “absolute power corrupts” and we have Peter—in a passive-aggressive act—using Edith to call a drone to attack Brad during a bus ride. It’s a hard and lethal lesson and a sobering wake-up call to the power of Edith.

Creepy things start to happen in Venice. Peter and his high-school pals are being terrorized by creatures called the Elementals, who come from another world, but look just like your average water monster and because it’s in the watery Venice, Italy, they run amuck through Venetian bridges and church towers, followed by the collapsing Venice building at the climax (again worthy of the ticket price). In Prague things get worse when a beast of angry fire jumps into the action. Lurking around Europe trying to do good is a new hero: Quentin Beck (Jake Gyllenhaal) who wears a bulky helmet that looks like a fishbowl. Not exactly cool, the eagle-eyed evil-fighter shoots out green lighting which earns him the nickname “Mysterio.”

He takes Peter under his wings but he isn’t quite what he seems.

Peter tries to hide his Spider-Man identity by wearing a black ninja version of his costume which earns him the nickname “the Night Monkey,” but the name really sums up his dilemma which is that he’s fighting a magic trick of pure evil. For a moment Peter feels trapped, outside of the normal world, which is all the doing of Mysterio—spoiler alert coming—a second rate

This is the eighth “Spider-Man” movie so exploring multi-universes seems a logical one given the nature of the key character and the villains. It’s cool watching Spider-Man fight against a drone army of illusion via a one-way mirror controlled by a button.

These are not the kind of films where you break down story or logic. It’s made for fun and driven by strong performances in which Gyllenhaal shines. He begins as a harmless, nerdy man but he reveals himself to be a dangerous man with hidden issues and something to prove.

Holland as Peter, the reluctant hero whose has doubts about his ability to live up to the role that Nick Fury (Samuel L. Jackson) wants him to, brings all the layers needed to help us understand his inner conflicts.