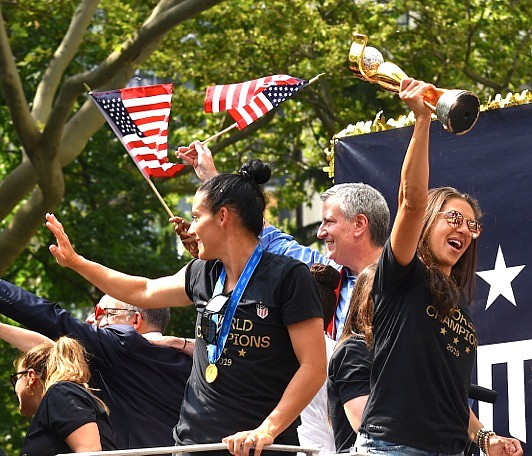 America is the most prosperous nation in the world. It is also a country divided by wide racial, cultural, social and gender fissures. The U.S. women’s national soccer team is utilizing its expansive platform to call for equal pay to their male counterparts and advocate for women in all sectors of the workforce to be compensated based on their value and not their gender.

This past Sunday, July 7, in France, the women’s national team culminated four weeks of stellar play by defeating the Netherlands 2-0 to capture their second consecutive World Cup championship and fourth overall. They were led by star player Megan Rapinoe, who has become the face and voice of the team’s call for gender equality. Rapinoe scored the day’s first goal and won the prestigious Golden Ball, awarded to the tournament’s most outstanding player.

According to a Pew Research Center analysis of median hourly earnings of both full- and part-time workers in the United States, in 2018, women earned 85 percent of what men earned. “Based on this estimate,” maintained Pew, “it would take an extra 39 days of work for women to earn what men did in 2018.”

This past March, the U.S. women’s national soccer team filed a lawsuit against U.S. Soccer in California district court, stating in the complaint that U.S. Soccer “has a policy and practice of discriminating” against them based on gender, paying them less than the men’s team.

The U.S. Soccer Federation filed a response in federal court stating, “U.S. Soccer’s challenged pay practices are not based on sex,” and is the result of “differences in the aggregate revenue generated by the different teams” as well as additional considerations. Last month, the 28 women’s players that are part of the suit, comprising the national team, and the USSF agreed to mediation as a means to settle their dispute.

But the shouts of equal pay were loud and prevalent both during the World Cup and the massive ticker tape parade held Wednesday,July 10 down Manhattan’s famous Canyon of Heroes, attended by over 1 million people.

The women’s team is patently more popular, inspiring and successful on the pitch than the men, who have never won a World Cup, are currently 30th in the FIFA rankings behind much smaller countries markedly less funded such as Peru, Tunisia and Romania, and failed to qualify for last year’s World Cup held in Russia and won by France.